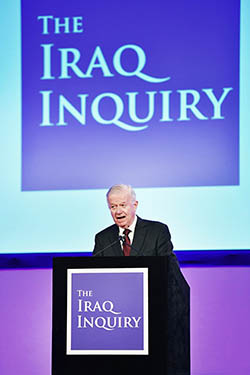 Chilcot releasing his report on the Iraq war

The recently released and long-awaited Chilcot report – a massive two million word tome – is providing crucial testimony and damning evidence of wrongdoing by the then British government in invading Iraq alongside US forces.

Unfortunately, this inquiry, however forthright and informative, will not change the reality that more than a million Iraqis lost their lives, and another four-to-five million have been displaced from their homes. In fact their security situation is far worse now than under Saddam Hussein, with the country’s economy also shattered.

All these crimes were committed under the guise of the presence of ‘weapons of mass destruction’, which were never found and never existed.

What is the remedy? Will British justice bring those criminals who did this to trial? They represent a large number of Tony Blair’s cabinet cronies, and of course ringleader Mr Blair himself! Or will it be typical of Western tradition to simply consign the tragedy to its history books?

Just a few days ago The Guardian’s Louise Kettle wrote that the rationale for going to war with Iraq was based on the threat to UK national interests posed by Saddam’s weapons of mass destruction. Yet in 2001-2 the greatest threats of nuclear and missile proliferation came from elsewhere.

Sir William Ehrman, Foreign Office director of international security at the time, told the inquiry that the nuclear programmes of Libya, Iran and North Korea were “maturing”, and were probably of greater concern than Iraq. A fact totally ignored by Tony Blair’s administration.

Furthermore, the inquiry has taken SEVEN years at a cost of more than 10 million pounds, and examines a “hugely significant and detrimental event in recent British history”.

Its findings are important and should be widely debated, but while opening a two-day Commons discussion of the Chilcot findings, present Chancellor Phillip Hammond said: “I suspect that the world’s eyes will not be focused on our proceedings with quite the laser light intensity that might have been expected”. And regrettably very few MPs bothered to attend the session.

The big question is why? This case is now nearly 13 years old, and Tony Blair clearly played an enormous role in delaying the report by withholding crucial documents.

Iraq today is not only in a mess, but half of it is controlled by Iran, which appointed a puppet government. The entire police force and intelligence network is also controlled by Iranian Revolutionary Guards and their henchmen. In fact, what everybody feared would transpire after the invasion – a worse case scenario that Iran would benefit from it – has become 100 per cent true!

The perceived decency and humanness of Whitehall, as well as Number 10 Downing Street, have been badly tarnished, not only in the eyes of Iraqis and Arabs, but also British citizens – especially those who lost dear ones in a treacherous and unnecessary war.

Yet there are still honourable men in Britain’s diplomatic corps. Men of high calibre, humanity and decency – like Ambassador Craig Murray, former UK envoy to Uzbekistan. It’s worth reminding ourselves of what he said in a television interview…

“I worked for the British Foreign Office, I became a British ambassador, I was a British diplomat for 20 years. I was always patriotic to be British, I was very, very proud.

I remember when I first became a British ambassador and first went out in my own flag car with the Union Jack flying on the front as the ambassador; I had a lump in my throat, it was a proud moment for me.

It was only six months after that I discovered that in the country where I was ambassador we and the Americans were shipping people in order for them to be tortured and some of them were tortured to death, now as you may imagine my world view changed.

I as a British diplomat saw all the internal memos that went through that decision, I know for certain – I used to be head of the FCO unit that monitored Iraqi weapons of mass destruction – I know for certain I can tell you they knew there weren’t any, it wasn’t a mistake, it was a lie.

I think it is impossible to be proud of the United Kingdom, I think when we invaded Iraq we did to the United Nations what Hitler and Mussolini did to the League of Nations.

I think what we’ve done since, where the truth is often much hidden in the bombing, if you look at Libya, disaster now, we bombed it.

We killed 15,000 people when NATO bombed it, something they never told you on the BBC, did we make it better? No.

I saw in Uzbekistan, I saw the gas contracts signed by Imron, a company called Unocal which George Bush senior was on the board, it’s a big gas pipeline from Uzbekistan and Kazakhstan over Afghanistan down to the Indian Ocean; that was actually what the Afghan war was about.

They’d actually had talks with the Taliban and Unocal to see if the Taliban would provide pipeline security.

The person who held those talks, the consultant of Unocal was certain Mr Karzai, who after being employed by George Bush senior as a consultant went on to become president of Afghanistan, that was their plan B; the Taliban wouldn’t do it so they invaded.

I’ve seen it on the inside; it’s almost always about control of resources, it is every bit as corrupt [interruption, inaudible chatter] I can tell you it is not an academic construct.

They don’t care how many people they kill abroad if it advances them and anybody who votes ‘no’ is voting to support a psychologically flawed, a pathological state which is a danger to the world, a rogue state, a state prepared to go to war to make a few people wealthy”.

Should we laugh, or should we cry? Whitehall mandarins, as well as White House spokesmen, constantly talk about human rights or the lack of them in our region or the Third World.

Yet they shamelessly never pause to think about what harm they have done to the world, never viewing themselves as collaborators or agents of doom and destruction.

They often merchandise so-called human rights as a tool to embezzle weaker nations.

It is time for this part of the world to think of their own countries and their people, and not be held to ransom by Western human wrongs in the name of human rights. Because those US and UK politicians who lack basic feelings of humanness, act in a self-serving, selfish way, as Genghis Khan and Tamberlaine did.

Let me end this article with a quote from an honourable Englishman, William Inge (Writer 1860-1954), who said: “It is useless for the sheep to pass resolutions in favour of vegetarianism while the wolf remains of a different opinion.”