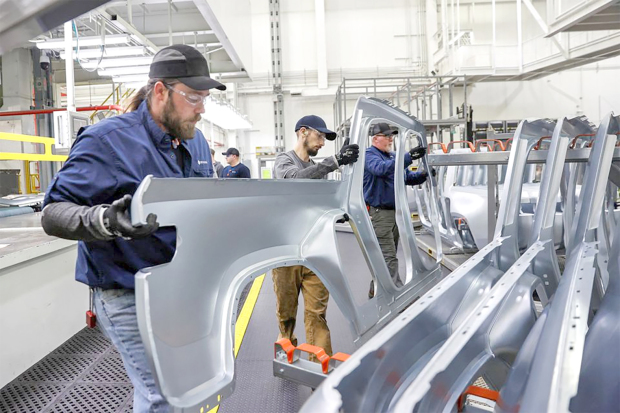 WASHINGTON: US job growth increased more than expected in April as manufacturers boosted hiring, underscoring the economy’s strong fundamentals despite a decline in output in the first quarter.

Though the Labour Department’s closely watched employment report yesterday showed a moderation in wage gains last month, wage price pressures are likely to continue to build amid record job openings. About 363,000 people left the labour force in April, pulling down the participation rate from a two-year high and potentially worsening worker shortages.

The Federal Reserve is trying to tighten monetary policy to bring down high inflation without tipping the economy into recession. The economy contracted last quarter under the weight of a record trade deficit.

“The firm payroll data is good in that it confirms that the labour market is strong and suggests the US economy may be sufficiently resilient to deal with the forthcoming monetary tightening,” said Seema Shah, chief strategist at Principal Global Investors. “For the Fed, there is nothing in today’s report to suggest they can take their foot off the brake.”

The survey of establishments showed non-farm payrolls rose by 428,000 jobs last month. But the economy created 38,000 fewer jobs in February and March than previously reported. It was the 12th straight month of employment gains in excess of 400,000.

Economists polled by Reuters had forecast payrolls would rise by 391,000 jobs. Estimates ranged from a low of 188,000 to a high of 517,000. Employment is now 1.2 million jobs below its pre-pandemic level.

The broad increase in hiring last month was led by the leisure and hospitality sector, which added 78,000 jobs. Restaurants and bars contributed 44,000 jobs to those gains, leaving employment in the industry 1.4m below its February 2020 level.

Manufacturing payrolls rose by 55,000 jobs after increasing by 43,000 in March, indicating that demand for goods remains strong, which should help to underpin consumer spending.

Transportation and warehousing employment increased by 52,000 jobs, pushing it 674,000 above its February 2020 level. Employment in the professional and business services also rose and is now 738,000 above its pre-pandemic level.

Employment in most industries is now at or above the February 2020 levels, though healthcare and manufacturing are thousands of jobs away from achieving that milestone. The leisure and hospitality sector still has a gap of 1.4m jobs.

The Fed on Wednesday raised its policy interest rate by half a percentage point, the biggest hike in 22 years, and said it would begin trimming its bond holdings next month. The US central bank started raising rates in March. Fed Chair Jerome Powell said “the labour market is extremely tight, and inflation is much too high.”

Average hourly earnings increased 0.3 per cent after advancing 0.5pc in March. That lowered the year-on-year increase in wages to a still robust 5.5pc from 5.6pc in March, but did nothing to ease fears of a wage price spiral.

There were a record 11.5m job openings on the last day of March, almost double the 5.9m people who were unemployed in April.

Compensation for American workers logged its largest increase in more than three decades in the first quarter, helping to keep domestic demand supported.

“The combination of a tight labour market, ample job opportunities and rising prices gives workers a significant amount of leverage in bargaining for higher wages,” said Sophia Koropeckyj, a senior economist at Moody’s Analytics in West Chester, Pennsylvania. “Hence, the Fed’s success in slowing the economy and tempering wage and price pressures is of paramount importance.”