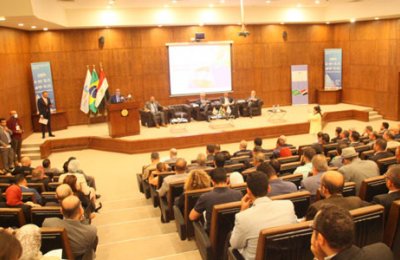 The Brazilian business mission
Brazil, which saw its 2022 first-quarter agribusiness exports to Arab countries jump 51% YoY to $3.56 billion, intends to further jack up bilateral trade with the 22 members of the Arab League.
As a first step to strengthening bilateral ties, the Arab Brazilian Chamber of Commerce (ABCC) joined a delegation from the Brazilian Ministry of Agriculture, Livestock and Food Supply (MAPA) as they travelled to Jordan, Egypt and Morocco.
Led by Brazil’s Agriculture Minister Marcos Montes, the group met representatives from private companies and government authorities to discuss the supply of fertilisers and the scope of expanding investments in Brazil, while also establishing target markets for Brazilian products.
Strong relations
Osmar Chohfi, President, ABCC said: “The Arab region and Brazil have always enjoyed strong relations. Through our meetings, we aim to realise new avenues for Brazilian goods to enter growing Arab markets. This initiative is in line with the mission of the Brazilian Government to strengthen exports to the Arab world and develop investment ties with Arab companies. It further symbolises the importance that Brazil gives to its trade partners. We are confident that our meetings with the distinguished officials from each region will yield fruitful results and serve as a crucial step towards strengthening ties between concerned parties and various key stakeholders.”
In Jordan, the minister engaged in meetings with officials from major potassium-producing companies, such as the Arab Potash Company (APC), which produces over 2.4 million tonnes per year; and the Jordan Phosphate Mining Company (JPMC) that has a production capacity of over seven million tonnes per year. During the meeting, the APC executives informed Montes about their plans to increase exports, open a branch office, and establish production operations in Brazil. APC, which is the only potash producer in the Arab countries, started exporting to the Brazilian market in 2019, with a volume of 42,000 tonnes. This climbed to 154,000 tonnes in 2020 and 138,000 tonnes in 2021.
Alternative fertiliser suppliers
In addition to increasing the supply of fertilisers, Montes also discussed various alternative fertiliser suppliers for Brazil. Asserting that agricultural production in Brazil could reach close to 300 million tonnes this year, Montes highlighted the importance of getting fertilisers to continue exporting food to the world.
The delegation also scheduled meetings with Jordan’s Minister of Agriculture Khaled Musa Henefat; and Minister of Industry, Trade and Supply Youssef Al-Shamal. Jordan further expressed ambitions to expand trade with the South American country in various other sectors too.
In Cairo, Egypt, Montes engaged in discussions with Deputy Minister of Agriculture Moustafa El Sayeed, Minister of Supply Aly Al Moselhy, and representatives from Egypt’s fertiliser and animal protein sector. During talks with Egyptian fertiliser companies, particularly superphosphate exporters, it was agreed that industry representatives will visit Brazil and interact with Brazilian agricultural importers and producers in a bid to make room for a higher trade. Backed by the government, the ABCC will organise the meetings in the coming months.
Brazil-Egypt Forum
MAPA delegates also participated in a Brazil-Egypt Forum entitled Opportunities in Bilateral Trade, hosted by the ABCC.
In a seminar held by the Arab Brazilian Chamber in Cairo, the Brazilian Agriculture Ministry presented growth prospects for Brazil as a global food supplier and Egypt’s relevant role as a fertiliser supplier. The event was organised by ABCC and supported by the Embassy of Brazil in Egypt and the Federation of Egyptians Chambers of Commerce (FEDCOC).
During the seminar, the minister spoke about Brazil’s commitment to global food security. Montes also met Egypt’s animal protein importers in the ABCC office and discussed product prices and how the Egyptians could keep buying goods from Brazil for low prices.
Visit to phosphate plant
In Morocco, meetings ensued with the kingdom’s Minister of Agriculture, Mohammed Sadiki. The delegation also carried out a visit to the Jorf Lasfar plant of the Office Chérifien des Phosphates (OCP) company- a state owned organisation that is currently the leading supplier of phosphorus to Brazil.
Brazilian Agricultural Research Corporation (Embrapa) president, Celso Moretti, who was accompanying the MAPA mission, said that they will open a unit in Marocco to expand cooperation in other fields.
The president of Embrapa could return to Morocco next month to continue the negotiations. Morocco is the world’s second largest producer of phosphate fertilisers, accounting for about 17% of global production. In 2021 alone, Brazil imported fertilisers worth $1.5 billion from Morocco.
Other exports
Among other Brazilian exports, exports of chicken rose about 23% to $882 million in Q1, and sugar sales rose 15% to $588.8 million. Sales of soybeans increased over 100% to $518 million, and wheat exports amounted to $311 million, a jump of 485%. Brazil's exports of corn and frozen beef to Arab countries also rose by 64% and 137%, respectively.-- TradeArabia News Service