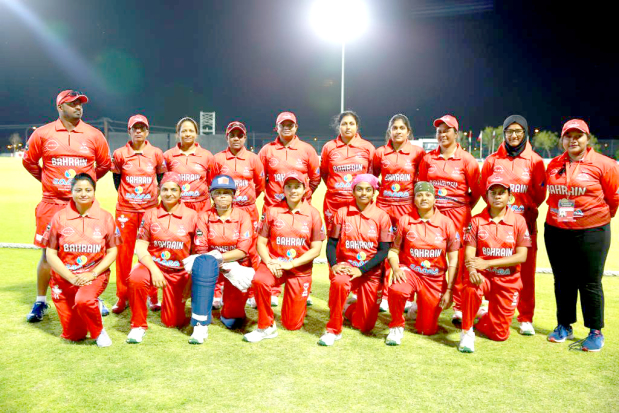 In a major boost for the sport in the kingdom, the Bahrain Women’s Cricket League has been awarded a global award, the ‘100% Female Cricket Initiative of the Year’, by the International Cricket Council (ICC), the game’s ruling body.

The ICC made the announcement in a media release marking the 2021 ICC Development Awards. The annual development awards are a celebration of the growth of cricket in countries that are ICC Associate Members.

This is the second ICC award for Bahrain’s women cricket initiative in the last two months. In April, the country was given a regional award, the ICC’s Female Cricket Initiative of the Year Award for the Middle East for, the ICC said, ‘Building a robust community of women cricketers’.

That award acknowledged an outstanding female, cricket-focused initiative delivered by an ICC Associate Member to promote the game, either through a physical participation programme or a digitally delivered game development initiative during the year.

“In the face of family and societal pressure, a previous lack of framework and through a restructured governing body, the women’s league went from a boardroom idea to a winners’ podium in the space of just four months,” the ICC said, explaining the rationale for the global award being awarded to the kingdom.

“Campaigning across schools and academies, the Bahrain Cricket Federation (BCF) saw a head-turning number of over 200 sign-ups, culminating in an inaugural eight-team league, held over three months. Unperturbed by both cultural and logistical issues, like playing on sand grounds and concrete wickets in some instances, the league was carried out across Manama, with a number of standout individual performances.”

BCF president Hatim Dadabai said he was delighted that the country had received such a ‘singular honour’.

“I am extremely happy that our dedicated efforts towards growing the game in Bahrain have received such a massive acknowledgement from the ICC,” he told the GDN. “This is a great, singular honour and will go a long way towards boosting the already quick pace of development that we have managed to achieve in such a short span of time.”

Since the BCF, previously known as the Bahrain Cricket Association, was rebranded and reconstituted in late 2021, it has embarked on a structured, nuanced plan to develop the game from the grassroots by introducing school competitions, setting up different age-level, and other, tournaments for both men and women and launching a drive to increase the participation of more locals in the sport.

The BCF’s advisory board chairman, Mohammed Mansoor, told the GDN that the federation would redouble its efforts to attract even more locals to start playing the game.

“Right now, the players who play in our different men and women’s leagues and represent the national sides are all expats,” he explained. “Through our various initiatives, especially in schools, we will try to bring more and more local players into the fold.”

The BCF’s chief development officer, Gurumurthy Palani told the GDN that the idea for the award-winning women’s league which led to the creation of the first-ever national women’s team earlier this year, had first been discussed in late 2021 in a meeting between BCF and ICC officials.

“Hatim and I met with Iqbal Sikander, the ICC’s regional cricket development head for Asia and Niteesha Kothari, the ICC’s finance and operations manager,” Palani said. “We are very grateful to the ICC for this award and the continuous support we have received from them in our efforts to ensure that our women, and men, cricketers continue to thrive and prosper.”

Palani added that the league had been built because of the huge amount of interest from budding female cricketers who were keen to play the game at an elite level and the BCF had started free coaching for girls, working women and homemakers before the competition was launched.

The award will officially be presented to the BCF after the ICC’s Annual General Meeting (AGM) in July, Mansoor said.

Players who participated in the women’s league were selected for the first-ever national women’s team, which then created history by becoming the first Bahraini team to play a T20I in the GCC Cup held in Oman in March.

A slew of world records were created in just their third international game during that tournament, with Deepika Rasangika Herath scoring 161 not out, the highest individual score in a women’s T20I, as Bahrain registered the highest team total in the format when they finished with 318/1 off their 20 overs against Saudi Arabia. Herath, in partnership with Tharanga Gajanayake (94 not out), also set a new world record for the highest-ever 2nd wicket T20I partnership: an unbroken, 255-run stand.

With performances like that, Dadabai said, and with the Bahrain women’s team set to get more international exposure in tournaments such as the 2022 Asian Cricket Council (ACC) Women’s T20 Championship which starts in Malaysia next week, women’s cricket was only going to get better and better.

None of the ground-breaking gains made in such a short time by the BCF, he added, would have been possible without the constant support and encouragement provided by Supreme Council for Youth and Sport first deputy chairman, General Sports Authority chairman and Bahrain Olympic Committee president Shaikh Khalid bin Hamad Al Khalifa.

“He is very keen to see the game develop further in the kingdom and takes great interest in how things are progressing,” Dadabai explained. “With his continued support, the BCF will try to ensure that both our women’s and men’s teams are competing with the best in the world as soon as possible.

“I would also like to thank all my colleagues in the BCF, the coaches, the players, our sponsors, everyone who made this award possible. This great honour is the result of teamwork, at every level in the BCF.”