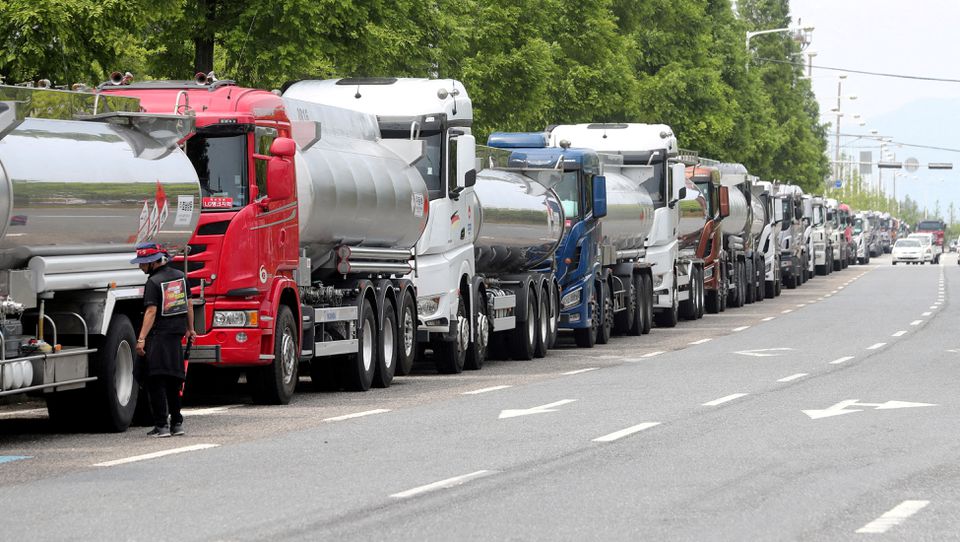 A member of the Cargo Truckers Solidarity union stands next to a truck during a strike in Yeosu, South Korea, June 9, 2022. Yonhap via Reuters

SEOUL: South Korea's unionised truckers headed back on the roads on Wednesday after the union and the transport ministry reached a tentative late-night agreement, ending a nationwide strike that crippled ports and industrial hubs.

Shares in some affected industries rose after the eight-day strike had delayed cargo shipments from autos to cement and alcohol, costing South Korea more than $1.2 billion in lost output and unfilled deliveries.

"So the strike has been called off until our demands are passed in parliament," said Park Jung-hoon, an official at the union's Busan chapter, referring to the process the transport ministry must undertake to implement the agreement.

"In the next two to three days, 100% of unionised truckers at Busan port are expected to return to work after they get some rest. There might be some shippers who seek retributions, and in such cases, we will respond strongly."

The strike had been an early test of the new government of President Yoon Suk-yeol and had further stretched global supply chains already disrupted by China's Covid-19 curbs and Russia's invasion of Ukraine.

Woo Sang-ho, the interim leader of the opposition liberal Democratic Party which has a majority in parliament, welcomed the agreement but said the issue of guaranteeing freight rates required legislation and called for "fundamental improvement" to address conditions faced by the truckers.

"The ruling party must not remain a mediator, but should promote directly" the minimum freight rate system as it is directly tied to people's safety, a joint statement with the union and a Democratic Party committee said on Wednesday.

There was confusion about whether the government and Yoon's ruling conservatives agreed to make the minimum pay system a permanent feature or merely extend a temporary measure for another fixed period, union official Kim Jae-gwang said.

Still, investors responded positively, with shares in Hyundai Motor gaining as much as 4.4% while shares in Hanil Cement rose as much as 7%, outperforming the benchmark KOSPI's 1.8% fall.

"Production has been normalised at our Ulsan Plant and we will continue to minimise customer inconvenience from the production disruption," Hyundai Motor said in a statement to Reuters on Wednesday.

Yoo Ji-woong, an analyst at Daol Securities estimated the strike had impacted about 5,000 vehicles each for both Hyundai and Kia but said there were sufficient opportunities to make up for lost production during June through overtime.

Steelmaker POSCO, a unit of POSCO Holdings, halted work at some plants on Monday due to a lack of space to store unshipped products, but plans to achieve originally planned production output by adjusting its maintenance.

"We plan to resume our overland transport of steel products out of Pohang and Gwangyang steel plants starting 1 pm on Wednesday," a spokesperson said.

Korea Zinc said its shipments of sulphuric acid, a key raw material of semiconductors, are back on track after strikers retreated from its production base in Ulsan.

An official at SK Plasma, which manufactures medicines with plasma, said shipments of plasma supplies, which had been trapped in Busan port, partially resumed on Wednesday.

But shares in drinks company HiteJinro rose as much as 4.5% in early trade, as subcontracted truckers had still not returned to work as of Wednesday morning because they had additional demands for a pay hike, a HiteJinro official said.