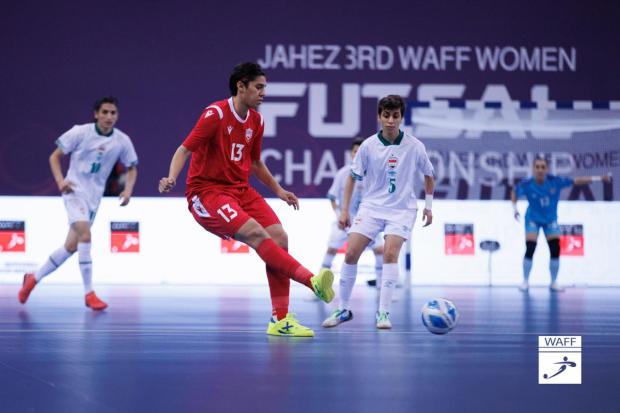 A LATE goal by Rawan Al Ali, with just three minutes left in the match, propelled Bahrain to a narrow 1-0 win over Iraq and a place in the semi-finals of the Third West Asian Football Federation (WAFF) Women’s Futsal Championship 2022 at King Abdullah Sports City Stadium in Jeddah.

The game, played at a breathless, frenetic pace, with plenty of missed opportunities for both sides, appeared destined for a goalless draw as the clock ticked down to full time.

But Al Ali, who had come on as one of the many substitutes allowed in futsal, had some magic in store for her side as she pounced on a free kick from just outside the Iraq box and sent the ball curving past an Iraqi defender and goalkeeper Shahjawan Mustafa whose desperate dive to her right came too late.

“The girls did a very good job,” an ecstatic Bahrain coach, Brazilian Lino Gomes, told the GDN by phone from Jeddah. “I am so proud of them. Especially since the Iraqi team were playing their first match today and had the chance to see us play on Thursday while we knew nothing about them. This was an outstanding performance by our team!”

Bahrain have topped their group with six points from two matches and will find out who they will play in the semi-finals on Wednesday after the final round of matches this evening.