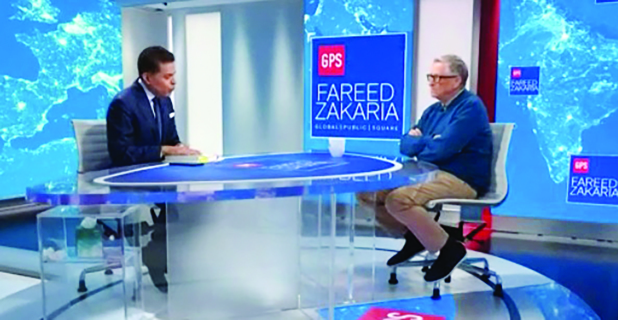 The GERM interview on CNN

WASHINGTON: Microsoft founder, philanthropist and public health advocate Bill Gates has spoken to an American TV channel about how his GERM of an idea could help prevent the next global pandemic.

He told CNN’s Fareed Zakaria how the Global Epidemic Response and Mobilisation plan would cost $1 billion a year.

“You want to stop it before it gets to lots of countries, which is when it becomes a so-called pandemic. You have to nip it in the bud,” he said.

The big risk is a human-to-human transmissible respiratory virus, he said, and it would make sense to have a group connected with the World Health Organisation (WHO) that ‘sees that outbreak early and is able to go in, to look, sequence what it is and the nature of it, and have some tools’ so ‘you can give people not only masks but give them drugs to block transmission’.

It’s tiny compared to the numbers involved in the Covid-19 pandemic, he added. Forbes, for example, reported that Covid-19’s $24 trillion cost so far means global economics will never be the same.

He fears it is just a matter of time before the next crisis hits, perhaps starting in Asian or Africa because the boundaries between animals and humans are getting closer and closer.

Following a fact-finding mission in China, a WHO team investigating the origins of the Covid-19 pandemic concluded that the virus probably originated in bats and passed to people through an intermediate animal.

Gates earlier told the UK’s Financial Times that his proposed GERM task force would require significant financial investment from WHO and its member countries in order to create a global team of experts, including epidemiologists and virologists, and give them the tools they need to proactively identify and contain future outbreaks.

“It’s one of the cheapest insurance policies,” Gates said on CNN in his latest interview.

Whether anyone listens, in the midst of soaring inflation and the Ukraine conflict, is anyone’s guess, although he has a track record on the subject.

Gates first recognised the threat of a pandemic during a 2015 Ted Talk titled: The next outbreak? We’re not ready.