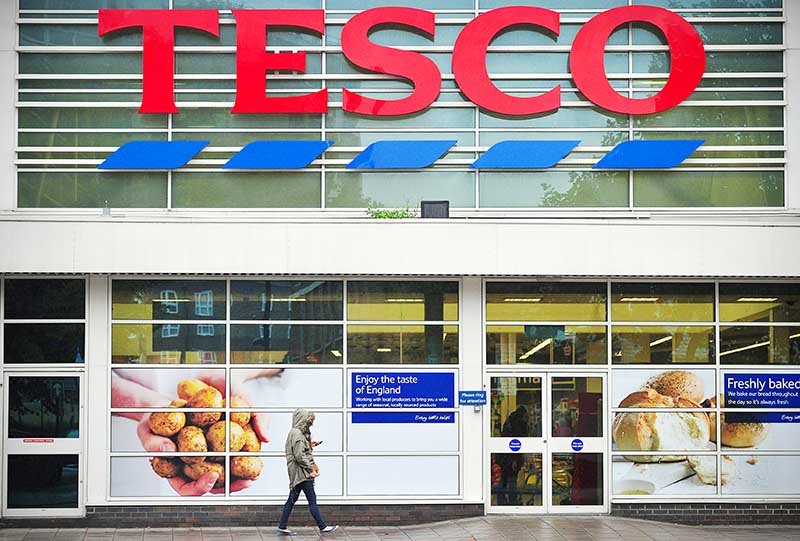 Tesco has had a horrendous 18 months, with competition from fast-growing discounters Aldi and Lidl, compounded by an accounting scandal, driving it to a record annual loss.

Tesco said sales at British shops open for more than a year fell 1.3 per cent in the 13 weeks to May 30, its fiscal first quarter, partly reflecting a drop in food prices across the industry.

But that was better than analysts’ forecasts for a fall of 1.6-3pc, an improvement on the previous quarter, and also better than recent figures from major rivals Asda, Sainsbury’s and Morrisons.

Tesco also said 180,000 more customers shopped at its UK stores in the quarter, with the volume of goods sold up 1.4pc on a like-for-like basis and transactions up 1.3pc.

“Stemming the defection of consumers is the first, and arguably the most important, battle to be won,” said Neil Saunders, managing director of retail researchers Conlumino.

“Lewis and (finance chief) Alan Stewart have the correct strategy in place and are managing the company very well. Fixing the UK business is at the heart of their strategy,” Chris Watt, fund manager of Jupiter Growth and Income Fund, one of Tesco’s top 45 shareholders, said.

However, others cautioned Tesco faced a battle to continue its recovery in the teeth of a brutal industry price war.

“The price driven competition we are seeing across UK food retailing has made a tough business tougher,” said Richard Marwood, senior investment manager at AXA Investment Managers, one of Tesco’s 30 largest shareholders.

All of Britain’s big four grocers are trying to recover ground lost to Aldi and Lidl with hundreds of millions of pounds of price cuts. They are also dealing with commodity-led deflation and are having to rethink strategies as customer habits shift from big weekly shops at large out of town stores.

Lewis is cutting costs and selling assets as he seeks to reduce Tesco’s debts, regain its investment-grade credit rating and rebuild its credibility. Prices are coming down, with 300 products reduced in the first quarter, part funded by a shake-up of its supplier base and a focus on best sellers.

“Whilst the market is still challenging and volatility is likely to remain a feature of short-term performance, these ... results represent another step in the right direction,” said Lewis, who took the helm in September.

After decades of dominance, Tesco in April reported a 2014-15 trading profit of £1.4 billion ($2.2bn), down nearly 60pc on the year before, and warned it might not match that level this year.

Lewis said the consensus forecast for a £1.4bn trading profit this year was an “aspiration”, pointing to expectations for deflation to continue alongside short-term disruption as Tesco changes its trading approach.

“This comment should imply that Tesco is making losses once again in the UK in the first half and that it may struggle to reach consensus profitability goals for financial year 15-16,” Espirito Santo analysts said.

Tesco’s update was published ahead of its annual shareholder meeting. Attended by around 1,000 investors it was a first chance to quiz the board directly since last year’s accounting scandal, which related to wrongly booked payments from suppliers.

However, an anticipated revolt over a £1.2 million pay-off to sacked CEO Philip Clarke and a £1m pay-out to ex-finance chief Laurie McIlwee failed to materialise, with only 11pc of votes cast opposing Tesco’s remuneration report and just 3.5pc opposing its pay policy.

Tesco, which also reported a slowdown in the sales decline at its Asian business, declined to comment on asset disposals.

The group is selling its data business Dunnhumby and, according to sources familiar with the matter, has hired HSBC to explore the $6bn sale of its South Korean unit, Tesco’s biggest business outside Britain.