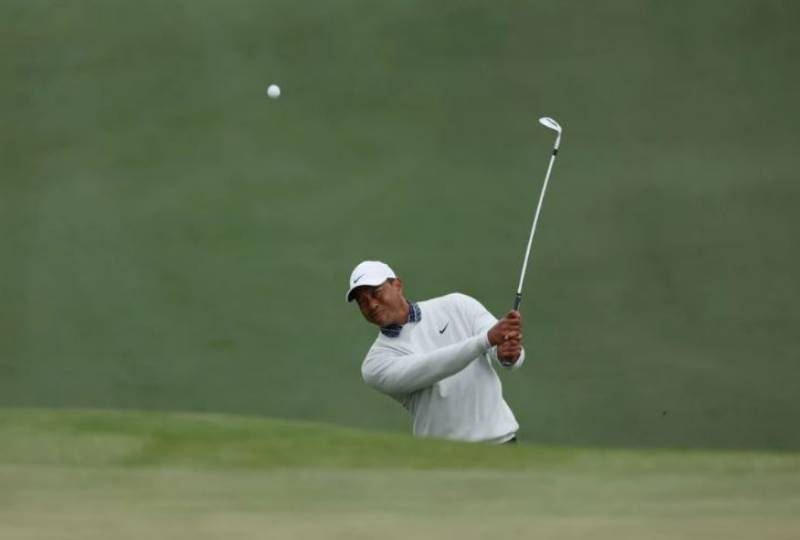 FILE PHOTO: Tiger Woods of the US chips onto the 7th green during the third round. Reuters Photo.

After sitting out last month's US Open, Tiger Woods was back playing competitive golf Monday, tuning up for the Open Championship at a pro-am event in Ireland.

Woods shot a 5-over-par 77 in the first round of the two-day JP McManus Pro-Am at Adare Manor Hotel & Golf Resort in County Limerick.

The highlight of Woods' round was a chip-in eagle at the par-5 12th hole that thrilled the crowd. But he also had a double bogey, six bogeys and just one birdie.

Woods last played at the PGA Championship in May, his second start after recovering from a brutal right leg injury that kept him away from the sport for more than 14 months.

He made the cut but withdrew after the third round.

The 15-time major winner committed to the pro-am back in April after he announced he would play in the 150th Open at St Andrews, the site of Woods' 2000 and 2005 Open victories and the most iconic course in the Open rotation.

The event benefits charities in Ireland and gives players a chance to play get acclimated to Europe ahead of the final major of the year.

Xander Schauffele, eight days removed from winning the Travelers Championship on the PGA Tour, shot an 8-under 64 to take a three-shot lead over Rickie Fowler lead in the individual competition.

England's Tyrrell Hatton was in third at 4-under 68.

Dustin Johnson (70), Bryson DeChambeau (72) and England's Lee Westwood (72) were among the other LIV-aligned participants.

LPGA Tour up-and-comer Leona Maguire of Ireland was the only woman in the field and opened with an even-par 72.

Jordan Spieth was disqualified, reportedly because he picked up his ball early at the end of a hole, forgetting that there was an individual component to the pro-am. He was allowed to continue participating in the team event.

The Open Championship will be played July 14-17.