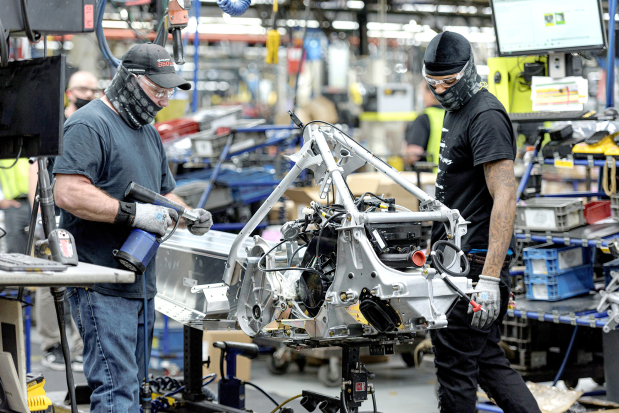 Non-farm payrolls increased by 528,000 jobs in the US last month, the largest gain since February

WASHINGTON: US jobs growth unexpectedly accelerated in July, lifting the level of employment above its pre-pandemic level and pouring cold water on fears the economy was in recession.

Non-farm payrolls increased by 528,000 jobs last month, the largest gain since February, the survey of establishments showed. Data for June was revised higher to show 398,000 jobs created instead of the previously reported 372,000. July marked the 19th straight month of payrolls expansion, and blew off economists’ expectations for a gain of only 250,000 jobs.

The labour market has now recouped all the jobs lost during the Covid-19 pandemic, though government employment remains about 597,000 jobs in the hole. Overall employment is now 32,000 jobs higher than in February 2020.

It took just under 2-1/2 years to recover all the jobs compared to at least six years after the 2007-2009 Great Recession.

But even with July’s robust jobs gains, some cracks are forming in the labour market. Businesses in the interest-rate-sensitive housing, finance, technology and retail sectors are laying off workers. Still, with 10.7 million job openings at the end of June and 1.8 openings for every unemployed person, a sharp deceleration in payrolls growth is unlikely this year.

Details of the household survey from which the unemployment rate is derived were mixed. While the unemployment rate fell to its pre-pandemic low of 3.5 per cent from 3.6pc in June, that was because 63,000 people left the labour force. The workforce has now declined for two straight months.

The labour force participation rate, or the proportion of working-age Americans who have a job or are looking for one, edged down to 62.1pc from 62.2pc in June. That mostly reflected a drop in participation by teenagers.

The prime-age population’s participation rate ticked up to 82.4pc from 82.3pc in June. The employment-population ratio for this cohort rebounded to 80pc, consistent with full employment.

The number of people working part-time for economic reasons increased by 303,000 to 3.9m after plunging to more than a 20-year low in June.

But household employment rebounded by 179,000 jobs after falling 315,000 in June, and the number of people experiencing long spells of unemployment dropped 269,000 to 1.1m, the lowest level since April 2020. These long-term unemployed accounted for 18.9pc of the 5.7m unemployed in July.

With the labour market tightening further, average hourly earnings increased 0.5pc after rising 0.4pc in June. That left the year-on-year increase in wages at 5.2pc. The workweek was unchanged at 34.6 hours.

Wage gains were mostly driven by industries in the services sector, including leisure and hospitality, financial, and professional and business services. A proxy for take-home pay surged 1.2pc on a month-on-month basis, which bodes well for consumer spending amid declining petrol prices.