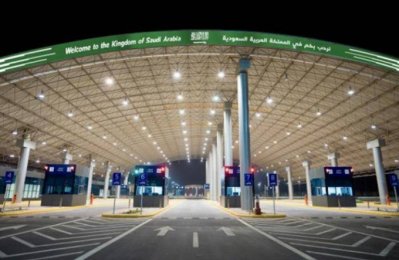 Saudi Arabia has opened the new expanded Salwa border crossing with Qatar.
Prince Saud bin Naif, Emir of the Eastern Province, inaugurated the new crossing and witnessed the trial operation of the passenger section at the new border facility, said a report in Saudi Gazette.
The border crossing has been expanded by four times of its previous capacity and now it can accommodate 12,000 cars in each direction per day. The capacity of vehicles per day before the completion of the expansion stood at 3,000.
The inaugural ceremony was held in the presence of Governor of Al-Ahsa, Prince Saud bin Talal bin Badr, and Director General of Saudi Passports (Jawazat) Lt Gen Suleiman Al-Yahya.
Salwa port is one of the most important border land ports in the Kingdom, and it witnesses the exchange of goods and the transit of individuals between Saudi Arabia and Qatar. Its importance is now increasing with the FIFA World Cup being held in Qatar from November, as it will be an important link for the transit of travelers from all over the world.