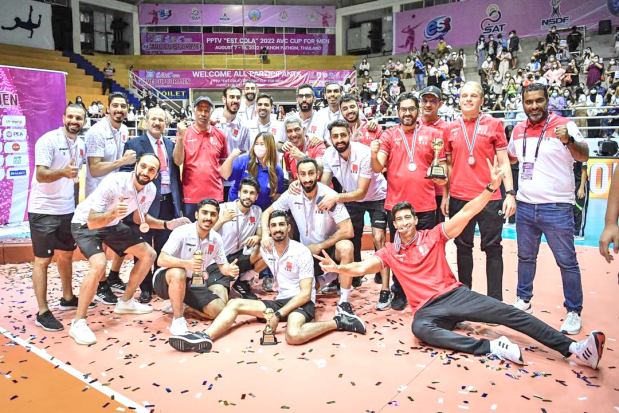 The Bahrain contingent celebrate with their bronze medals

Ranked 70th in the world and 11th in Asia, Bahrain’s hard-fought, 25-23, 27-25, 32-30, victory in the third-place play-off over South Korea, who are ranked seventh in Asia and 35th in the world, bore testament to the players’ focus, commitment and skills, the team’s head coach said after the game.

“We worked hard every day in the tournament to get to this point,” Issanaye Ramiress Ferraz told reporters. “I want to thank the players, the team management and support staff for all the hard work they put in. I also wish to thank my family who have to put up with my long absences away from home. And, finally, thank you, Bahrain, for everything!”

Bahrain’s victory was even more impressive considering they were playing their fourth game in as many days and had to shrug off the disappointment of a semi-final loss to Japan just the day before.

But, if they were fatigued, the Bahraini players didn’t show it as they entered the third set, leading 2-0 in the game, and immediately proceeded to take a 4-0 lead in the first three minutes. That soon became 6-2, after the South Koreans managed to score their first couple of points.

Bahrain continued to inch forward with the South Koreans trying to chip away at their lead. Ten minutes into the set, Bahrain were leading 9-6, which then became 15-13.

South Korea eventually caught up and, with the score reading 17-17, sought to go into the lead. Just minutes later, they succeeded with the score at 20-19 in their favour.

With victory in sight, however, Bahrain were determined not to let the South Koreans take the set and finally managed to equalise at 24-24. When their opponents inched ahead again to make it 25-24, Bahrain promptly restored parity to make it 25-25.

A couple of points later, Bahrain finally regained their lead to make the score 28-27 in their favour. The South Koreans managed to equalise quickly, but Bahrain took the lead again at 29-28.

The third set had now been underway for nearly 45 minutes and it looked likely to carry on for even longer as Bahrain made it 30-29, only to see their opponents level the score again, before the kingdom’s team added one more point with the scoreboard reading 31-30 in their favour.

Unfortunately for the South Koreans, there was to be no comeback for them this time, as Bahrain scored another crucial point to finally take the set, 32-30, and the game, which had lasted almost two hours, 3-0.

Earlier, Bahrain had wasted no time in racing into a 7-5 lead, just six minutes into the first set. Although the South Koreans managed to reduce the lead to just one point at 12-13, the Bahrainis continued to stay ahead at 16-15 and 20-19.

Soon, Bahrain had built up another two-point lead at 23-21 and, again, at 24-22 and, although the South Koreans managed to add one more point, the Bahrainis quickly rallied to add another point and take the set, 25-23.

Stung by the 1-0 lead Bahrain had taken, the South Koreans sped into a 5-3 advantage early in the second set. They had increased it to 11-9 before Bahrain began to fight back and soon, the score read 14-15 in South Korea’s favour.

The battle was on in earnest now but the South Koreans steadfastly held on to their advantage and, when they had extended their lead to three points at 21-18, it appeared that they might end up taking the set to level the game at 1-1.

But Bahrain suddenly found some momentum and added four quick points to draw level at 22-22. The South Koreans, taken off-guard by their opponents’ sudden resurgence, started to make unforced errors and saw Bahrain surge into the lead, at 24-23.

They managed to equalise one last time, at 25-25, but the momentum had shifted in Bahrain’s favour and, before long, they had taken the set, 27-25, and were leading 2-0 in the game.

The victory over South Korea, who won the AVC Cup in 2014, was an appropriate bookend for Bahrain whose first-ever appearance in the tournament began with a win over highly-rated Chinese Taipei and whose only losses in six games were to eventual champions, China, and runners-up, Japan.