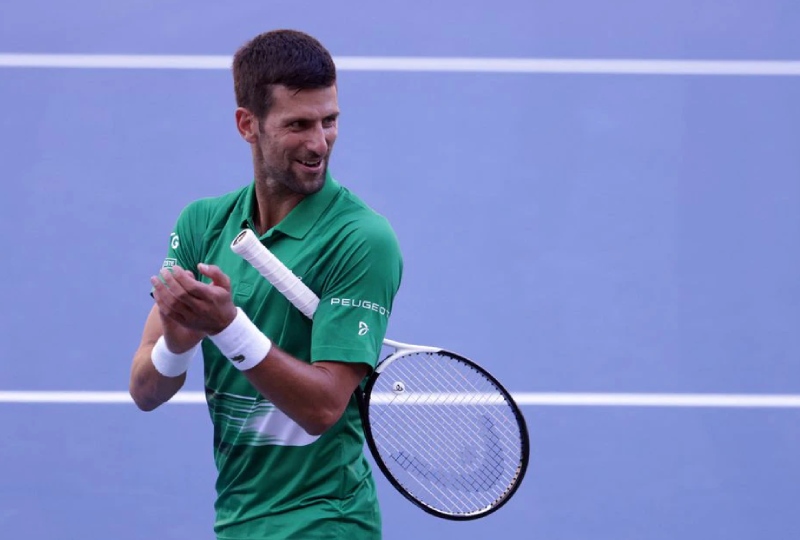 Serbian tennis player Novak Djokovic performs during the opening of a regional tennis centre that will prepare top tennis players for major tournaments, in Visoko, Bosnia and Herzegovina (Reuters Photo)

Former world number one Novak Djokovic will miss the US Open after he said on Thursday that he will not be able to travel to New York for the tournament,having chosen not to be vaccinated against Covid-19.

Current rules require travellers to show proof of full vaccination to board flights to and enter the United States.

"Sadly, I will not be able to travel to NY this time for US Open," Djokovic wrote on Twitter. "Good luck to my fellow players! I'll keep in good shape and positive spirit and wait for an opportunity to compete again."

The Serbian previously said he was prepared to miss Grand Slam tournaments that require participating players to be vaccinated against Covid-19.

Djokovic was on the entry list for the Aug. 29-Sept. 11 tournament in New York.

The 35-year-old was also unable to defend his Australian Open crown this year after being deported from the country over his vaccination status.

The United States Tennis Association (USTA) described Djokovic's absence as "unfortunate" but looked forward to having him back at Flushing Meadows next year.

"Novak is a great champion and it is very unfortunate that he will be unable to compete at the 2022 US Open, as he is unable to enter the country due to the federal government's vaccination policy for non-U.S. citizens," said U.S. Open tournament director Stacey Allaster in a statement.

"We look forward to welcoming Novak back at the 2023 US Open."

Many had hoped to see Djokovic on the Flushing Meadows hard courts where he has hoisted the trophy three times and reached the final on six other occasions.

The hashtag #LetNovakPlay has been circulating on social media as Djokovic's fans voiced their support for a player who moved to within one of Spaniard Rafa Nadal's record of 22 Grand Slam titles after his Wimbledon triumph last month.

Fans had also been circulating an online petition in the hope of gaining Djokovic entry into the US while four-times US Open winner John McEnroe had said it would be "a joke" if the Serb was unable to compete due to his Covid vaccination status.

Others, including players, have taken the position that rules are rules and if you want to play you need to follow the guidelines.

"I think that it is obviously his decision to not be vaccinated but it is also the decisions of countries to require vaccines or not require vaccines," 2017 US Open finalist Madison Keys told Reuters at the WTA's Her Health Advantage Media Event.

"I don’t feel comfortable saying I don’t think vaccines should be required or I do.

"I think it’s just purely a (situation of) this is the requirement, you can either do it or you can’t do it.