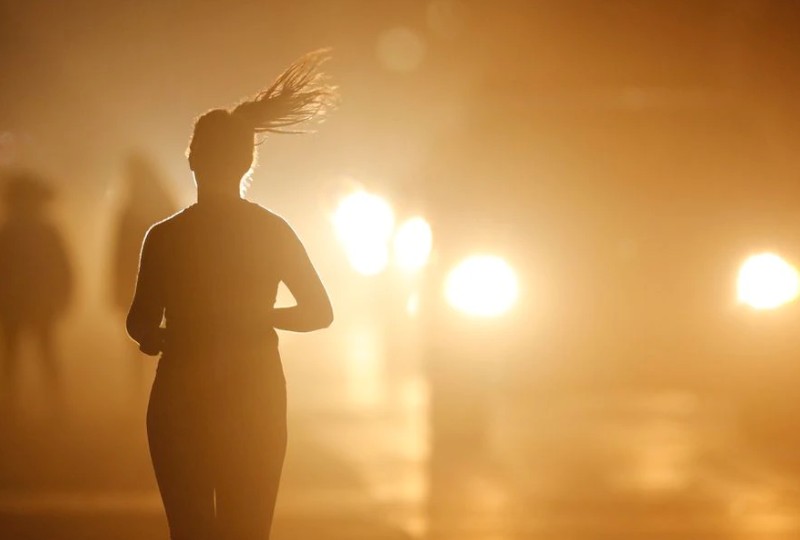 FILE IMAGE: A women jogs along a roadside as temperatures cool off after sunset in Oceanside, California, US July 5, 2018. Reuters Photo

DETROIT: Many of the automatic braking systems automakers are using to prevent vehicles from hitting pedestrians do not work well in the dark, according to test results released Tuesday by the US non-profit group Insurance Institute for Highway Safety.

The group, backed by the insurance industry, said 12 of the 23 sedans, midsize SUVs and small trucks it evaluated earned a "basic" rating or no credit at all, because they failed to detect or slow adequately for a dummy pedestrian in nighttime tests. About three-quarters of pedestrian deaths happen at night, the IIHS said.

Starting with the 2023 model year, the IIHS will require vehicles to earn a "superior" or "advanced" rating on the new nighttime pedestrian detection test to receive a "Top Safety Pick +" rating from the organization. Automakers strive for top ratings from the IIHS, as they do from the U.S. National Highway Traffic Safety Administration.

The IIHS is focusing on pedestrian detection technology as fatalities involving people on foot being struck by vehicles are rising sharply on U.S. highways. Pedestrian fatalities rose in 2021 to 7,342 deaths, up 13% from the year before and up 80% from the low point in 2009, according to federal data.

There is not yet a government test or performance standard for pedestrian-detecting automatic braking systems. And there is no federal requirement for nighttime testing of such systems, said IIHS President David Harkey.

The IIHS found wide variation in systems performance both between competing automakers and between different models sold by the same automaker.

Nissan Motor Co's 2022 Pathfinder was rated "superior," while the company's Altima sedan received "no credit" in the IIHS tests.

Nissan said in a statement it is "still evaluating the results from the latest IIHS testing, including the difference in results in combination with the performance of the equipped headlights."

Volkswagen said in a statement that the vehicles IIHS tested only use radar.

"We are confident that the next versions of the Atlas, Atlas Cross Sport and Tiguan should perform better because they fuse camera and radar sensors and will hopefully achieve an Advanced rating.”

Toyota said its Tacoma pickup, which received a “no credit” rating in the IIHS test, is not equipped with a system that can detect pedestrians at night. The Toyota Highlander and Camry received “superior” ratings, and have more advanced pedestrian detection technology. Toyota did not comment on the IIHS testing method.

Ford and General Motors did not immediately respond to requests for comment.

Eight of 12 vehicles that earned low, "basic" or "no credit" scores in the nighttime test had systems that earned "superior" or "advanced" ratings in daytime testing, the IIHS said.

The IIHS is using its tests to push automakers to improve the performance of automatic braking systems, but Harkey said the rise in pedestrian deaths is driven by multiple factors, including vehicle speed, pedestrian behaviour and the growing share of larger, heavier, taller trucks and SUVs.