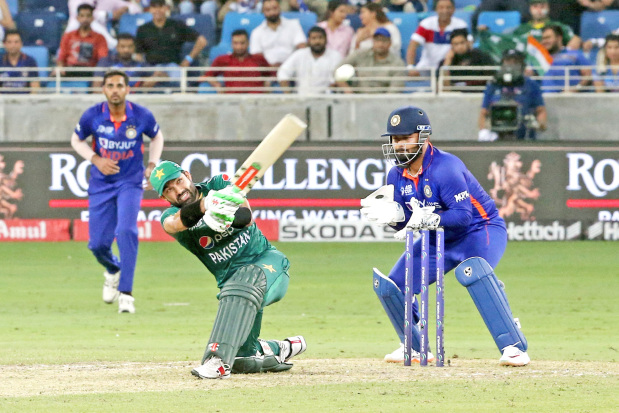 Dubai: A stiff target, a disciplined Indian attack at the start, Babar Azam’s third failure on the trot and some spine-tingling death overs drama, Pakistan overcame them all to beat India by five wickets at the DP World T20 Asia Cup Super Four clash at the Dubai International Cricket Stadium last night.

After a Virat Kohli-inspired India set a big target of 182, Mohammad Rizwan (71) played the innings of his life to set the platform for Pakistan’s victory.

But the wicketkeeper-batsman, who had earlier survived an injury scare while keeping, could not have revived Pakistan alone after the team lost Babar (14) and Fakhar Zaman (15) before the ninth over, with just 63 runs on the board.

And it was all-rounder Mohammad Nawaz (42) who turned the game on its head with an astonishing counterattack.

Promoted to number four by the think-tank in a bold move, Nawaz repaid the faith in style.

India saw an opening when Nawaz fell to Bhuvneshwar Kumar while going for another six and Hardik Pandya ended Rizwan’s masterful knock in the 17th over, with Pakistan still needing 35 runs off 19 balls.

But Arshdeep Singh dropped the easiest of catches at short third-man when Asif Ali had yet to open his account with Ravi Bishnoi being the unfortunate bowler.

Ali (16) made India pay the penalty with some big hits as his 33-run partnership with Khushdil Shah (14) took Pakistan closer to the target, with just seven needed off the last six balls.

But Singh bowled a brilliant last over and had Ali plumb in front of the wicket in the fourth ball with Pakistan needing two off the last two balls.

Number seven Iftikhar Ahmed, though, walked in and kept his cool amid the chaos before hitting Singh straight over his head for a boundary to complete a memorable victory.

Earlier, inspired by a whirlwind start from the openers and a superbly-paced half-century from Kohli (60), India had posted a challenging total of 181 for seven.

Pakistan captain Babar won the toss and asked Rohit Sharma to have a first go with the bat.