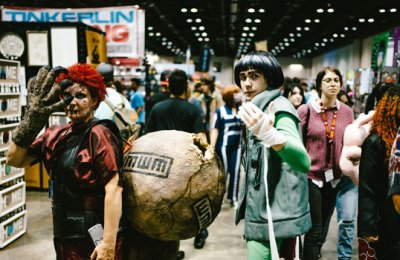 Some of the talents
Dubai will be hosting its first edition of PopCon Middle East (PopConME) from November 10 to 13, 2022, promising the ultimate weekend with the best in Movies, TV, comics, graphic novels, anime, cosplay and much more.
In partnership with Dubai Festivals and Retail Establishment (DFRE), Speedy Comics and Alanza Trading, PopConME will take place at the Dubai Exhibition Centre (DEC), Expo City Dubai, featuring exclusive workshops, movie screenings, Cosplay gaming competitions and much more.
PopConME will be running as part of Dubai Esports Festival (DEF 2022) taking place from November 9 to 20, 2022, the most exciting esports and gaming event in the Middle East, and a trend-setter for the region’s gaming industry which is set to cement Dubai’s position as a year-round global hub for esports and gaming.
Dream come true
“We are excited to introduce PopConME to Dubai. I have been a fan of comic books since I was a child and have been entrenched in the community from an early age. This is a dream come true for a true geek like me. I want this convention to have everything and more my geek heart desires.” said Amer Rashed Al Farooq, Deputy CEO, Speedy Comics Group, the region’s number one destination for vintage comics and pop culture collectibles.
This festival will give fans the opportunity to celebrate their favourite celebrities, meet like-minded people, and indulge in the world of fantasy all under one roof. Comic book geeks will get the opportunity to meet and greet their favourite talents up close, attend exclusive workshops and buy one-of-a-kind merchandise at the Artist Alley. Packed with interactive zones and activations PopConME will host its own People’s Choice Cosplay, Dungeons & Dragons, Pokémon/Yu-Gi-Oh Card Competitions.
Featuring a line-up of some of the biggest international talents, PopConME has already confirmed the attendance of Nightmare on Elm Street actress Katie Cassidy, who is also known for her portrayal of the demon Ruby in the fantasy horror series, Supernatural and Black Canary in Arrow. Also confirmed to attend are CW Supernatural Kevin Tran and Dirk Gently's Holistic Detective Agency actor, Osric Chau and voice actor Ray Porter best known for his portrayal of DC Comics Villain, Darkseid in Zack Snyder’s Justice League.-- TradeArabia News Service