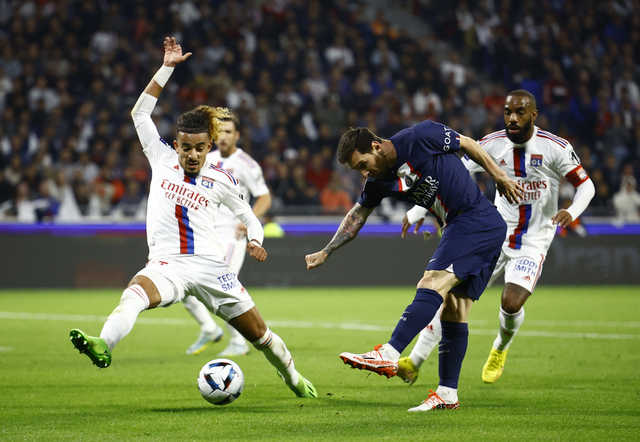 PARIS - Lionel Messi's early goal earned Paris St Germain a 1-0 win at Olympique Lyonnais on Sunday as they opened a two-point lead at the top of Ligue 1.

Messi found the back of the net with his fourth league goal of the season in the fifth minute to put Christophe Galtier's side on 22 points from eight games.

Olympique de Marseille are second after being held to a 1-1 home draw by Stade Rennais earlier on Sunday.

Lyon, who have now lost their last three matches, are sixth on 13 points.

PSG have won nine and drawn one of their 10 games in all competitions and while they have shown less brilliance lately, they were still a cut above at the Groupama Stadium.

The performance, however, was not enough for PSG midfielder Vitinha, who believed they should have put the match to bed.

"I'm satisfied with the result but not with the performance. We could have played better. There's a lot of room for improvement," the Portuguese said.

"We should have controlled the match better in the second half and we should have had more chances with the possession we had."

It was a dream start for PSG, who went ahead from their first opportunity with Messi beating Anthony Lopes from just inside the area after collecting Neymar's pass.

The Argentine had another chance early in the second half but Lopes this time pulled off a superb save to keep his team in contention.

Lyon had their best chance in the 76th but Marquinhos blocked Moussa Dembele's header on the goal line.

Neymar and Messi had two more opportunities for PSG, only for Lopes to deny them, but the hosts were never able to threaten again.

The midfielder scored both goals, but the opener was into his own net. Second-placed Marseille have 20 points from eight games.

Lens are fourth on 18 points after a 0-0 draw at Nantes that left them unbeaten this season but without a win at La Beaujoire in their last nine visits.

Marseille fell behind in the 25th minute when Guendouzi deflected Hamari Traore's cross into his own net.

The France international, however, made up for his mistake seven minutes into the second half by heading home from Jordan Veretout's corner.

Elsewhere, Jean-Clair Todibo was sent off after nine seconds as Nice slumped to a 1-0 defeat to Angers and Monaco moved up to fifth on 14 points with a 3-0 victory at Stade de Reims.