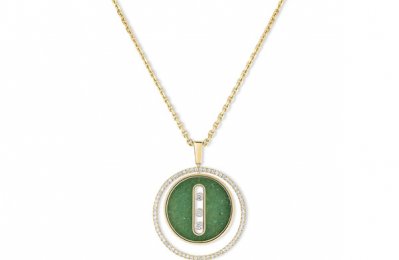 Messika, one of the world's most innovative and modern diamond jewellery houses, has announced that it is introducing a limited-edition variation of the Maison’s iconic Lucky Move medium model necklace in honour of the trailblazing progress and accomplishments made by Saudi Arabia as its celebrated its 92nd Nationa Day on September 23.
Paying homage to the emblematic colors of the Kingdom’s flag, Valérie Messika envisages a brand new talisman which merges Messika’s pioneering house codes with the visionary outlook of Saudi Arabia.
Rich, glistening greens, set ablaze with radiant diamonds, deliver an unprecedented proposal; marking the first instance that Aventurine stone is ever cast within the Maison’s creations, said a statement from Messika.
This innovative use of the rare and treasured stone underlines the designer’s penchant for crafting symbolic diamonds jewels that reflect the individualistic essence of the woman who wears them, it stated.
A magnificent crystal with a captivating presence, Aventurine signifies prosperity and leadership; an apt summation of the Kingdom’s stature as it stands on the cusp of a historic metamorphosis, said the top diamond jewellery house.
Purposefully selected by Valérie, Aventurine’s mesmerizing green hues are combined with refined yellow gold, delivering an inspired medallion that possesses extraordinary capabilities; stimulating mental clarity, creativity and compassion in the years that follow, it added.
Reserved to just 203 numbered editions, every KSA Edition is further imbued with meaning, a tribute to Saudi Vision 2030 and September 23, the occasion of Saudi National Day and the launch date of the limited-edition KSA creations," said a company spokeswoman.
"Developed in close collaboration with the Maison’s local partner Platinum Sands, the KSA Edition necklace will be exclusive to Messika boutiques within the kingdom," she added.-TradeArabia News Service