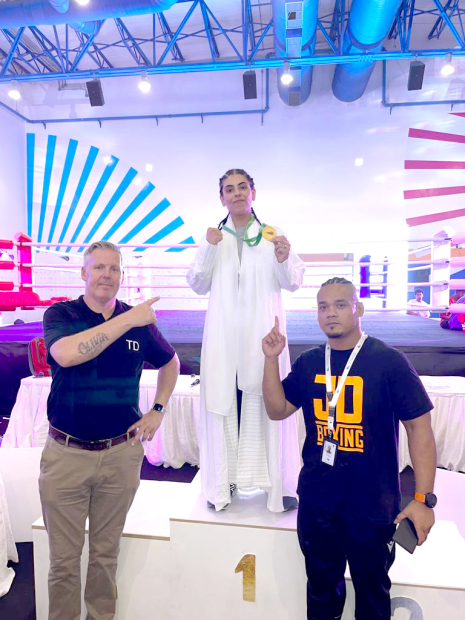 Coach Davis, left, hopes that the event will inspire more young girls to follow in the footsteps of AlNaimi, centre

The Bahrain Boxing Federation (BBF) is hosting a unique event today designed to enthuse and inspire young children and people from all walks of life into taking up the sport.

Called simply ‘Domestic Boxing’, the event, which will run for more than six hours after starting in the afternoon in the Isa Bin Rashid Sports Halls in Isa Town, was designed to be open for registration to anyone who wanted to participate and the response has been ‘overwhelming’, according to the president of the BBF.

“This is a continuation of the journey the BBF has undertaken in terms of developing the sport of boxing in Bahrain,” BBF head Omar Salman Al Slaise told the GDN. “We intend this to be the first of many such bouts – we’re not calling it a ‘championship’ on purpose – so that more and more people start taking up the sport.”

The response to the call for registration for the event had been surprisingly good, he added.

“The bouts are open for anyone to participate in,” Al Slaise continued. “There will be contests between children of different ages, between adults, male and female, who might be interested in the sport but had never actually competed before.

“We weren’t sure what kind of response to expect, but, to tell you the truth, it’s been absolutely overwhelming! So many people have registered, especially young boys and girls, and it’s a good sign for the BBF because the whole point of the initiative is to scout new, young talent so that the federation can start grooming them.”

The BBF had plans to make it a quarterly – and, eventually, even a monthly – event, Al Slaise added.

“We intend for it to be a consistent feature on our domestic circuit,” the BBF’s technical director and national team coach, Tony Davis, told the GDN. “We’re planning to do another one in early December. We need regular boxing in the country and initiatives like these will go a long way towards attracting new talent which can then be worked on by the federation.”

With people in attendance being able to watch locals, of every age and gender, competing on a stage hosted by the BBF, the federation hoped that the local population would be more enthused by the sport, get involved in the local gyms and help scouts to identify raw talent that could be moulded further by coaches and trainers, he added.

“We are also hoping to attract women boxers,” Davis said. “We want them to be excited by the sport. We already have some really good ones. One of our best female boxers, 27-year-old Ragad Ibrahim AlNaimi is a dual Bahraini-Saudi national and she’s going to be competing in the Saudi championships in December. We’re hoping many others will follow in her footsteps.”

Some clubs in Bahrain already had women boxers, who were fully involved in the sport, and the BBF was hoping to collaborate with them soon, Al Slaise added.

“Also, an event like this – which will feature bouts between schoolboys, juniors and adults – will help the sport to grow further and, hopefully, entice other people to consider taking up coaching, refereeing and judging roles too,” he continued. “Boxing doesn’t operate in a vacuum; it isn’t a street-fight. There are rules, regulations, weight categories to be taken into consideration and people to interpret and enforce them.

“That’s why we, at the BBF, hope that people start wanting to become coaches and referees, etc. What we lack in Bahrain in the boxing context at present are people in these roles. And there’s a whole process for someone to become, say, a judge. So, as all these parts of the sport grow together in the kingdom, the future will become extremely bright.”

The event is scheduled for a 3pm start.