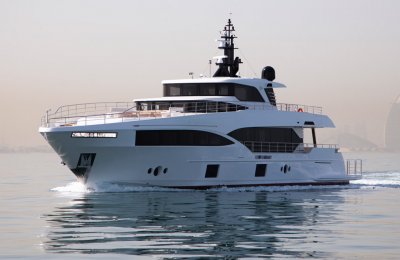 Gulf Craft, one of the world’s leading boat and yacht manufacturers, is gearing up to disrupt the industry with a special announcement at the Monaco Yacht Show taking place from September 28 – October 1.

Celebrating its 40th anniversary this year, the manufacturer with in-house capabilities in design, innovation, and production, is set to astonish yachting aficionados at the leading global event through the revelation which will further strengthen its credentials as a leader of innovation and technology in the industry alongside its current ultra-luxurious Majesty Yacht line up.

Recognised internationally as the leader in composite hull production, Gulf Craft has consistently raised the bar in design and performance and further cemented its position as an innovator in the use of composites with the Majesty 175, the world’s largest composite-built production superyacht, bolstering the shipyard and the UAE’s position as a leader on the global superyacht stage.

Following its European debut at Cannes Yachting Festival, the Majesty 120, Gulf Craft’s youngest tri-deck in the Majesty Yachts portfolio, which was first announced at the Monaco Yacht Show 2019, will be marking its show debut alongside the class-leading Majesty 100 - Gulf Craft’s best seller in 2021.

A key contributor to the UAE’s manufacturing industry, the Emirati company proudly flying the UAE flag in international ports and harbours will also be playing an integral role in highlighting the country’s growing prominence as an emerging yachting hub at a panel discussion hosted by Dubai’s Department of Economy and Tourism and the Department of Culture and Tourism, Abu Dhabi.

Inaugurated in 1991, Monaco Yacht Show has grown to become one of the leading industry events and is the only show dedicated to superyachts. The annual international show held at Port Hercule features over hundred new and innovative vessels over 30 metres each year.– TradeArabia News Service