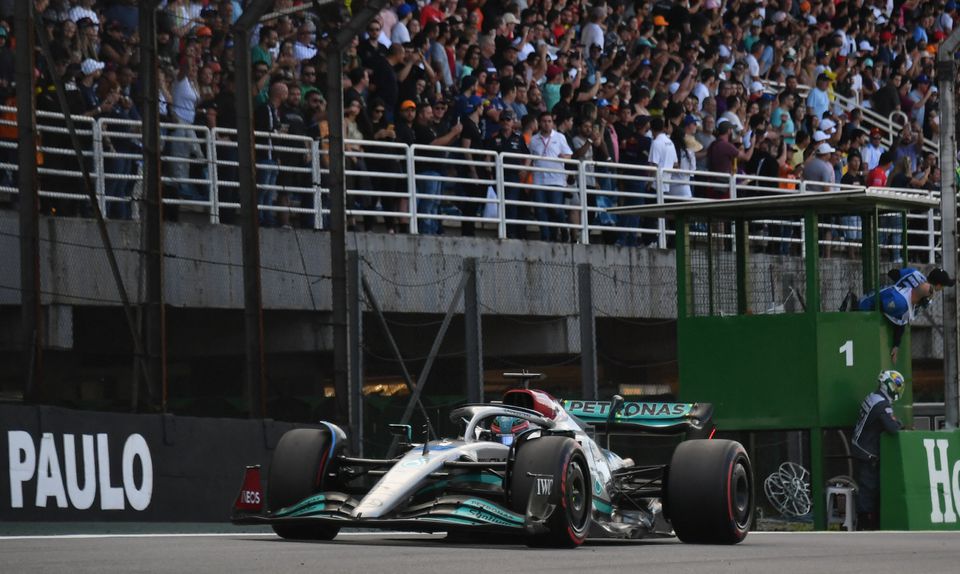 George Russell gave Mercedes a first win of the Formula One season in a Sao Paulo sprint on Saturday, with seven-times world champion team mate Lewis Hamilton joining him on the front row for Sunday's grand prix.

Ferrari's Carlos Sainz finished second at the chequered flag but will drop back due to a five place penalty for exceeding his season's engine allocation.

That promoted Hamilton from third, but race stewards were looking into a potential infringement at the start although Mercedes were confident they were in the clear and back with a bang.

"That's how we roll, baby," shouted Russell, who had started third and powered past Verstappen on the 15th of 24 laps after a thrilling wheel-to-wheel chase, over the radio as he took the chequered flag.

Verstappen, who lined up on the front row at Interlagos alongside first time pole-sitter Kevin Magnussen's Haas, finished fourth but will also move up a place and remains a threat.

He made contact with Sainz's Ferrari as the Spaniard overtook.

The Dutch driver was the only front-runner to start on the medium tyres, with Russell on softs, and that seemed a mistake by a driver who has won a record 14 grands prix this season and both previous sprints.

"We weren't expecting to have that much pace, but it goes to show all the hard work we are putting in and the progress we as a team have made," said Russell.

"The car has been feeling great and it is difficult to know how Max would have got on if he had been on the soft tyres."

The 24-lap 100km race decided the starting order for Sunday's main grand prix at Interlagos, the penultimate round of the season.

Red Bull and Verstappen have already won both championships and triumphed in the last nine races.

Magnussen, who secured an astonishing pole in Friday's qualifying, took a point for Haas by holding on to finish eighth.

The Dane was passed by Verstappen on lap three and dropped steadily down the order.