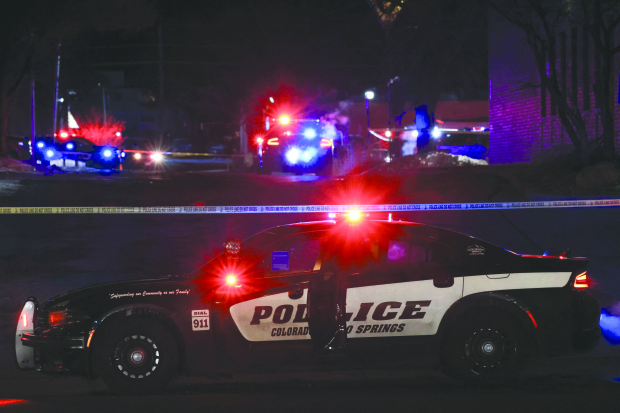 Police vehicles outside the club after the shooting

‘Heroic’ club-goers fought and stopped a gunman shortly after he opened fire inside a nightclub in Colorado Springs, killing at least five people and injuring 18 others, police said yesterday.

Police identified the suspect as Anderson Lee Aldrich, a 22-year-old man, who shot at patrons with a long rifle, a powerful weapon that can inflict devastating wounds. He was taken into police custody shortly after the shooting began and was being treated for injuries, according to officials.

Club Q, which describes itself as an adult-oriented gay and lesbian nightclub, called Saturday night’s events a ‘hate attack’ in a statement on its Facebook page. Authorities said they were investigating whether the attack was motivated by hate.

“Club Q is a safe haven for our LGBTQ citizens,” he said. “I’m so terribly saddened and heartbroken.”

Joshua Thurman choked up as he told reporters that he was dancing in the club when he first heard the gunshots. He sought refuge in a dressing room and locked himself inside with other people, praying for his life and thinking about his loved ones.

“It’s supposed to be our safe place. A community shouldn’t have to go through something like this for us to come together,” Thurman told local media, adding that one of his friends was killed in the shooting.

“We must drive out the inequities that contribute to violence against LGBTQI+ people,” U.S. President Joe Biden said in a statement. “We cannot and must not tolerate hate.”

Colorado Governor Jared Polis, who in 2018 became the first openly gay man in the country to be elected as a governor, commended the ‘brave individuals who blocked the gunman’ in a statement released on Twitter.