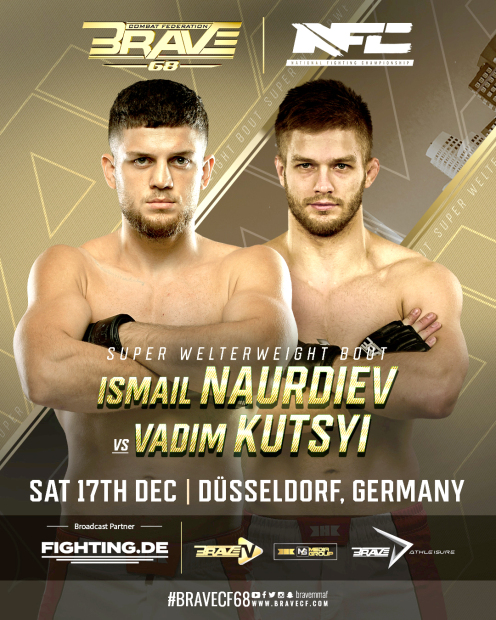 BRAVE Combat Federation will once again treat German fans to a spectacle of fights as another BRAVE CF 68 fight has been confirmed.

Austria’s Ismail Naurdiev will face Belarus’ Vadim Kutsyi in a super welterweight bout on the final card of the 2022 BRAVE CF calendar when the promotion touches down in Dusseldorf on December 17, in association with NFC. Naurdiev hopes to get his title campaign back on track following another failed attempt at securing the prestigious BRAVE CF 175-pound title after Poland’s Marcin Bandel submitted him via armbar in the BRAVE CF 63 main event last month.

Kutsyi will make his second appearance in the BRAVE CF organisation following a successful debut at BRAVE CF 51 where he secured a unanimous decision over Kyrgyzstan’s Daniyar Abdibaev. Heading into BRAVE CF 68, Kutsy aims to continue building on his incredible nine-fight win streak when he takes on ‘The Austrian Wonderboy’.

This fight news follows the confirmation of German-Brazilian star Joilton Lutterbach and Moldova’s Mihail Cotruta who are set to light up the cage with a banger 165-pound interim world title fight in the co-main event of BRAVE CF 68.

This will be the second-ever BRAVE CF German show following the tremendous success achieved by the partnership between BRAVE CF and NFC (National Fighting Championship) with BRAVE CF 61 / NFC 10, which took place in Bonn in August.