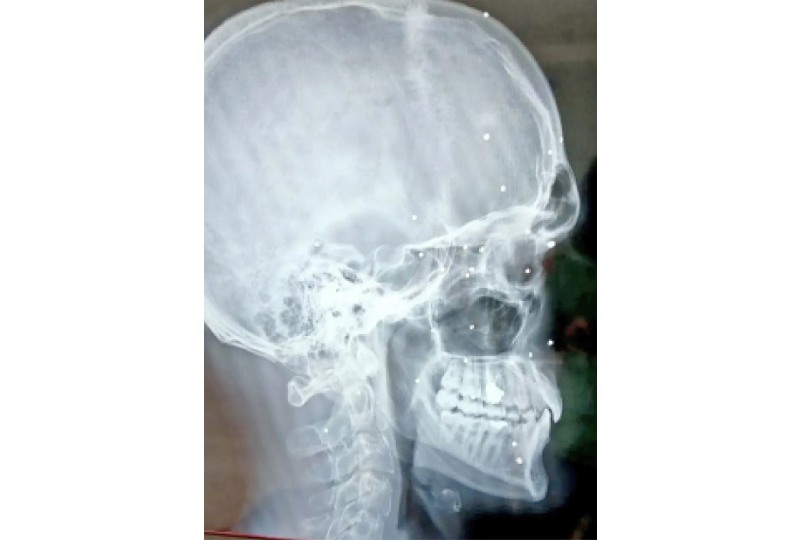 CT scans of a 22-year-old patient in Kurdistan province reveal metal pellets lodged in his face and eyes, which were both ruptured

Among the most irreversible effects of the Iranian regime’s efforts to crush the uprising has been the blinding of people taking part in them, the New York Times reported.

Across Iran, scores of protesters have gone to hospitals with eyes ruptured by metal pellets and rubber bullets that security forces fire into their faces to disperse crowds.

The full scope of the injuries in Iran has been largely concealed by an Internet blackout there. But medical evidence given to The Times by doctors, protesters, family members of patients and rights groups revealed that ophthalmology wards in hospitals have been inundated with hundreds of eye wound victims.

Eyewitness accounts and more than 80 pages of medical records from several hospitals and clinics showed that the range of injuries have included mutilated retinas, severed optic nerves and punctured irises.

Ophthalmologists from three large hospitals in Tehran – Farabi, Rasoul Akram and Labbafinezhad – estimated that their wards had admitted a total of more than 500 patients with grave eye injuries since the start of the protests in mid-September.

Many have arrived with metal or rubber fragments still lodged in their heads. Doctors in Kurdistan Province in the north estimated that they had treated at least 80 such patients.

In response, more than 230 ophthalmologists have signed a joint letter published this week addressed to the president of the Iranian Ophthalmology Association, Dr Mahmod Jabbarvand, calling on him to make the ‘irreparable consequences of such severe injuries’ known to the government.

Farabi Eye Hospital, which has the country’s premier ophthalmology ward, has been especially strained by the surge in cases, doctors and witnesses said. In one three-week period last month, the hospital saw more than 150 patients. The deluge of traumatic cases has prompted at least one surgeon to resign in protest.

“I have never seen a scene like this, it was terrifying,” said the mother of one of the injured, a protester who lost his eye in Tehran. She had been living outside Iran and flew to the capital to be with him before his surgery.