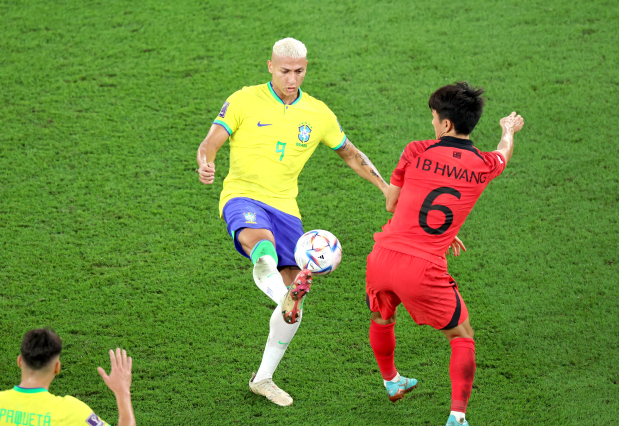 World Cup favourites Brazil produced a performance to delight fans and terrify potential opponents last night as they ripped through South Korea with four first-half goals to secure a hugely impressive 4-1 victory in their last 16 clash.

They were ahead after seven minutes when Raphinha’s low cross reached Vinicius Jr and he expertly lifted the ball above the charging goalkeeper and three defenders.

Five minutes later it was 2-0 with a Neymar penalty and Richarlison added a brilliant third after a spell of juggling then a razor combination with Marquinhos and Thiago Silva that had Brazil’s delirious fans dancing and neutrals everywhere purring.

Lucas Paqueta volleyed in the fourth after 36 minutes and the five-times champions played the second half as an exhibition, denied more goals only by impressive Korean goalkeeper Kim Seung-gyu, as they turned their attention to Friday’s quarter-final meeting with Croatia.

Korea worked tirelessly and bravely to try to limit the damage and were rewarded for their own attacking efforts when Paik Seung-ho smashed in a brilliant long-range shot beyond Alisson 13 minutes from time.

With the scores deadlocked at 1-1 after an absorbing 90 minutes, Japan’s Kaoru Mitoma went closest in the scrappy half-hour of extra time, forcing Livakovic to parry away his powerful drive.

Daichi Kamada had shot off target after a flowing Japan counter-attack minutes before Daizen Maeda deservedly put them ahead in the 43rd minute, firing home from close range after Ritsu Doan delivered an in-swinging cross into the penalty area.

Croatia forward Ivan Perisic, who was denied by Japan goalkeeper Shuichi Gonda in the opening minutes, pulled them level 10 minutes into the second half after meeting Dejan Lovren’s cross with a powerful header.

For Japan, this was last-16 heartache for the fourth time after a loss to Turkey in 2002, exiting on penalties against Paraguay in 2010 and giving up a 2-0 lead to lose to a stoppage- time goal against Belgium four years ago.