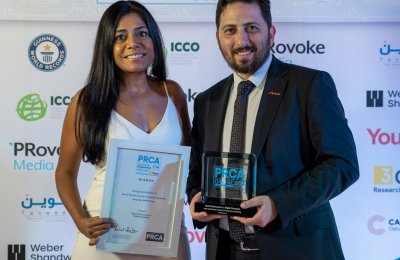 Unveiled in May 2022 at the Arabian Travel Market in Dubai, Ras Al Khaimah Tourism Development Authority and strategic brand partner Sputnik Floyd were recognised by industry experts for the highly successful and impactful launch of its brand campaign #RAKCalling with three wins for Best Performance in a Digital Campaign, Best Use of Paid Media in a Campaign and Best Digital Marketing Campaign.

The team were also awarded ‘Highly Commended’ for Best Use of Content Marketing in a Campaign, Best Use of Social Influencers in a Campaign and Best Use of Video in a Campaign.  The PRCA Mena Digital Awards recognises the talent and impact of individuals, teams and campaigns during the year, from the best of the digital PR and communications industry.

Raki Phillips, CEO of Ras Al Khaimah Tourism Development Authority, commented: “It’s fantastic to see our forward-thinking and creativity being recognised by PRCA Mena. #RAKCalling marked an exciting step in providing visitors with immersive content that not only highlights our iconic locations but also gives a sense of how Ras Al Khaimah can make you feel.

“Marking a new chapter in our virtual presence, as we are on the cusp of the metaverse, it was designed to articulate what our Emirate stood for in the new era of travel through a multi-faceted campaign that was relevant to today’s audience.”

Designed to resonate with post-pandemic travellers, #RAKCalling delivered immersive content, placing the audience in the middle of the action to create a campaign that could easily be understood and remembered.

As an emerging destination working to a smaller budget, RAKTDA took a strategic choice to work with influencers and content creators that were accessible and reflected the down to earth positioning of the destination. Using content and creative assets in the destination, Sputnik Floyd was the creative and media buying partner for the campaign, which was launched in the Middle East and Europe in multiple languages via digital and social media channels.

The campaign starred a number of well-known influencers taking part in a range of activities in the destination, chosen for their appeal in these five key markets. Including, Egyptian actor Sherif Fayed (@sheriffayed) who paraglided over the Hajar Mountains in a teaser for the soon-to-be launched Jais Wings experience, while Saudi mountaineer Raha Moharrak (@rahamoharrak) experienced the thrill of the Jebel Jais Flight and UAE-based radio host Kris Fade (@krisfade) rock climbed at Bear Grylls Explorers Camp. – TradeArabia News Service