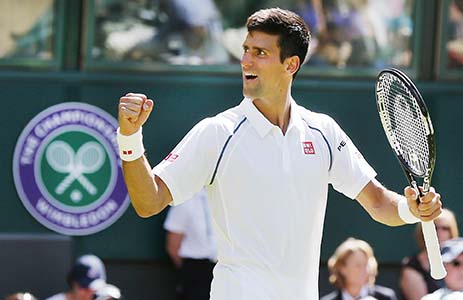 London: Defending champion Novak Djokovic moved confidently into the second round of Wimbledon with a 6-4 6-4 6-4 win over German Philipp Kohlschreiber yesterday.

With no competitive matches in the build-up to the championships after his French Open final loss, Djokovic, on paper at least, had a dangerous opponent in the 33rd-ranked Kohlschreiber.

But the 28-year-old Serbian was clinical on the big points and never looked like becoming the first defending champion to fall in the first round since 2003.

He broke in the 10th game of the opener and squeezed the throttle at the same stage of the second, securing a two-set lead with backhand winner and a roar of delight.

“This is the cradle of our sport, it doesn’t get any bigger than Wimbledon Centre Court and it’s an honour and to be defending champion,” he said. “I had a tough opponent, he can be very tricky especially on the grass but I stayed composed.”

Kohlschreiber, the highest-ranked men’s player outside the seedings at No. 33, had figured to pose a stiff test for Djokovic, who came to Wimbledon after a painful loss to Stan Warwinka in the French Open final and without having played a warm-up tournament on grass.

But the Serb was rarely troubled, seizing command with his all-court game, serving 12 aces and breaking five times.

Lleyton Hewitt’s Wimbledon farewell ended in an agonising defeat as Finland’s Jarkko Nieminen out-lasted the 2002 champion 3-6, 6-3, 4-6, 6-0, 11-9 in a thrilling first round clash yesterday.

Hewitt is embarking on a prolonged goodbye tour before retiring after next year’s Australian Open and he was hoping for one last hurrah on his 17th and final visit to the All England Club.

Other men’s winners yesterday included No 9 Marin Cilic, No 16 David Goffin, No 17 John Isner and No 26 Nick Kyrgios.

US Open champion Marin Cilic, the ninth seeded Croatian and a quarter-finalist at Wimbledon last year, got past Japanese qualifier Hiroki Moriya 6-3, 6-2, 7-6 (7/4).