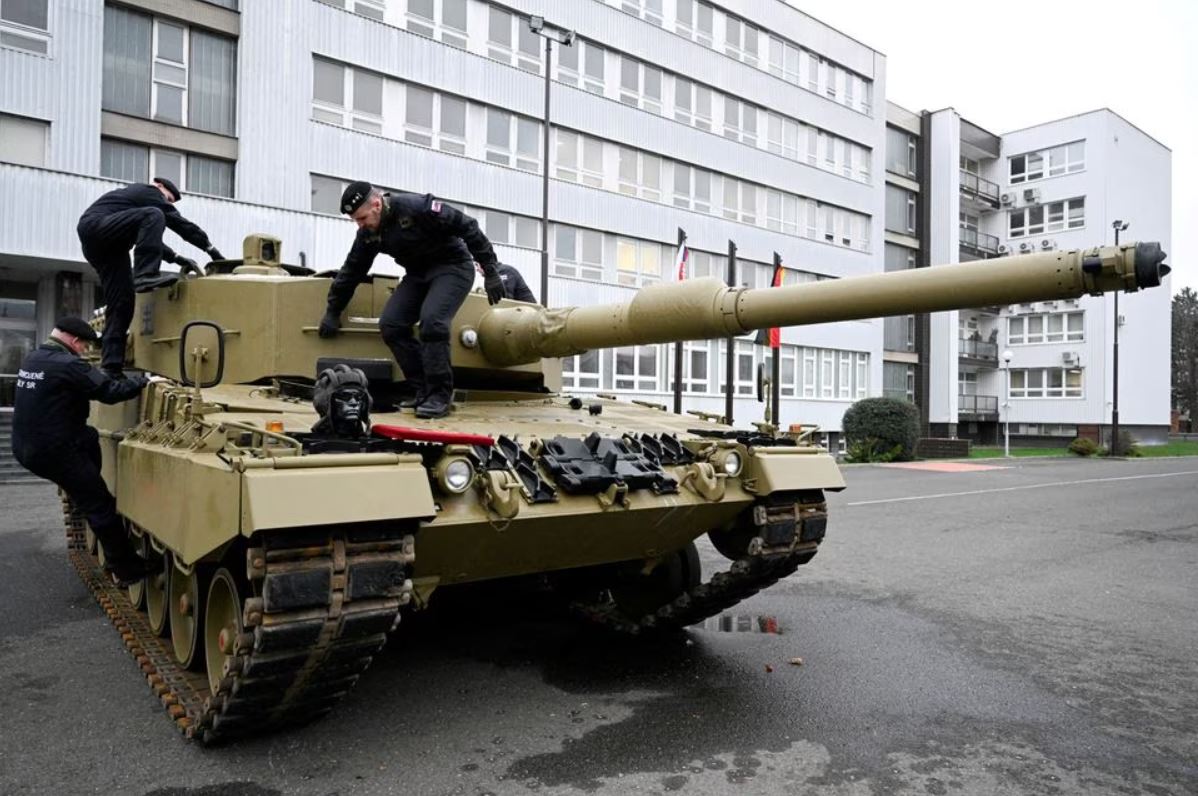 Members of the military walk on a tank, as Germany delivers its first Leopard tanks to Slovakia as part of a deal after Slovakia donated fighting vehicles to Ukraine, in Bratislava, Slovakia, December 19, 2022. (Reuters Photo)

BERLIN - Germany said on Wednesday it would supply its Leopard 2 tanks to Ukraine, overcoming misgivings about sending heavy weaponry that Kyiv sees as crucial to defeat the Russian invasion but Moscow casts as a provocation.

Pressure has been building for weeks on German Chancellor Olaf Scholz's government to send the tanks and allow other NATO allies to do the same ahead of expected spring offensives by both sides.

Scholz's government had stalled, wary of moves that could prompt Russia to escalate or suck the NATO alliance into becoming a party to the conflict.

Germany's decision paves the way for other countries such as Poland, Spain, Finland and Norway to supply some of their Leopard tanks to Ukraine, going some way towards delivering the hundreds of tanks that Ukraine says it needs, especially if the United States follows suit.

"This decision follows our well-known line of supporting Ukraine to the best of our ability. We are acting in a closely coordinated manner internationally," Scholz said in a statement.

The goal was to quickly establish two battalions with Leopard 2 tanks for Ukraine, the statement said, adding that Germany would initially provide 14 Leopard 2 tanks from its own inventory.

A battalion normally comprises three or four companies with around 14 tanks each. Poland has also pledged 14 tanks and Britain has promised 14 of its own Challengers.

Training of Ukrainian troops in Germany will begin soon, and Germany will also provide logistics and ammunition, it said.

Germany will also issue the appropriate transfer permits to partner countries that want to deliver Leopard 2 tanks quickly to Ukraine from their own stocks, it said.

The Leopards, used by armies across Europe, are widely seen as the best option for Ukraine as they are available in large numbers and relatively easy to deploy and maintain.

In tandem, Washington may also drop its opposition to sending perhaps dozens of its M1 Abrams tanks to Kyiv.

While the Abrams is seen as less suitable for Ukraine due to its heavy fuel consumption and greater maintenance needs, such a move could ease German concerns about presenting a united front among Ukraine's allies.

"The battle tanks strengthen Ukraine against Putin. It is an important step that the USA participates alongside the Leopard. German diplomacy has contributed to this togetherness," German Finance Minister Christian Lindner said.

Russia has cast deliveries of heavy weapons to Ukraine as proof that the West is escalating the war.

An ally of President Vladimir Putin said it would lead to a global catastrophe. Russia's ambassador to the United States on Wednesday called deliveries of battle tanks by Washington "another blatant provocation".

Kyiv has pleaded for months for Western tanks, which it says will give its forces the firepower and mobility to break through Russian defensive lines and recapture occupied territory in the east and south.

British Prime Minister Rishi Sunak welcomed Germany's decision, writing on Twitter: "Together, we are accelerating our efforts to ensure Ukraine wins this war and secures a lasting peace."

Polish Prime Minister Mateusz Morawiecki thanked German Chancellor Olaf Scholz in a tweet that said: "The decision to send Leopards to Ukraine is a big step towards stopping Russia."