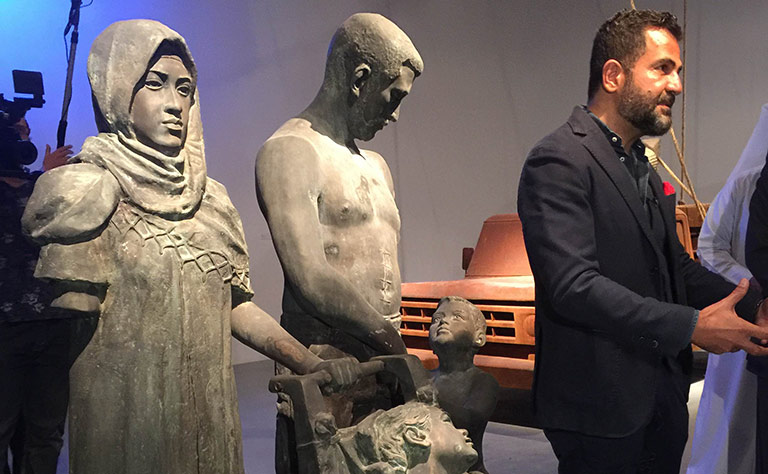 Fragments, an exhibition by Mahmoud Obaidi, is a response to the destruction of Iraq after the invasion of 2003. It sees Obaidi try to recreate all that has been stolen or destroyed in the country as he grapples with the loss of 7,000 years of history in a fraction of that time.

In this major exhibition, Obaidi traces the trail of destruction through a series of installations, each connected by a rope representing the ‘organised chaos’ let loose upon Iraq. Obaidi tries to piece Baghdad back together again.

From installations recounting significant moments in Iraq’s recent history such as a toppled statue of Saddam Hussein, to installations offering a perspective on the life of a modern day Iraqi family, and installations carrying remnants of ancient Iraqi culture, the exhibition offers a lasting memory of all that has been lost.

The exhibition is about memory and forgetting, about exile and grief, about the meaning of home and, finally, of the possibility of endurance.

The following artworks are highlights of the exhibition: One striking piece is called Untitled and addresses the significance of the fall of the statue of Saddam Hussein in April 2003, which was described as marking the symbolic conclusion of the Battle of Baghdad.

This moment marked the beginning of a surge in looting and violence that would go on to engulf the city. In this artwork, Obaidi uses the idea of the toppled statue as the starting point for the ‘organised chaos’ that was to follow.

By threading a rope from the monument to the fallen jet, to the stolen artefacts, he tells the story of the destruction of his homeland through these connected installations.

Another installation is called Ford 71. The work, made from bronze and steel, shows a Ford pickup truck, piled high with relics from the ancient Assyrian, Babylonian and Sumerian cultures.

Another installation, called Remains of a Ravaged City, spans almost eight metres. The artwork is a statement on a large scale about the destruction of Iraq and the artist’s sense of loss.

Behind the aggressively applied black brush strokes, Obaidi depicts a riot of partially obscured figures, evoking a sense of menace and unease.