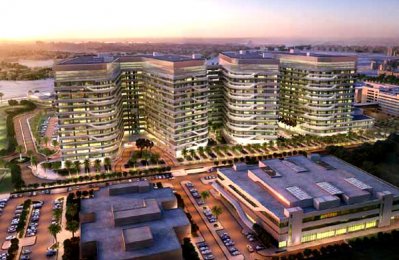 Kuwait’s projects market maintained its relatively healthy momentum in the third quarter with the government awarding contracts worth KD1 billion ($3.4 billion), up 15 per cent over KD129 million ($426 million) over the previous quarter.

Even as lower oil prices continue to dampen state oil earnings, the government remains committed to implementing its development plan and is awarding major infrastructure contracts, according to a report by National Bank of Kuwait.

The total value of contracts awarded so far this year have risen to KD3.6 billion ($12 billion), stated the country's top lender citing data from Meed Projects.

With another KD2.3 billion ($7.7 billion) expected before year-end, 2016 should be another stellar year in terms of contract awards, stated the report.

According to NBK, the total value of Kuwait’s projects market (active and planned) stood at KD75.1 billion ($247 billion) by the end of September, up 0.8 per cent year-to-date.

Looking ahead to 2017, the total value of awarded projects is expected to increase to KD11.5 billion ($38.1 billion). In spite of the challenges facing Kuwait’s project market - mainly lower oil earnings and sub-optimal levels of foreign direct investment (FDI) - capital for projects is not in short supply thanks to the government’s commitment to rolling out its infrastructure development plan.

Moreover, a central plank of the plan is the participation of the private sector through at least eight public private partnerships (PPP), said the NBK report.

After softening in the second quarter, project awards in the oil and gas sector were boosted this quarter by Kuwait Oil Company’s (KOC) signing of the remaining two packages (Packages 1 & 2) of the Jurassic Non-Associated Gas Reserves project: the West and East Raudhatain fields.

However, the sector is expected to get a boost in fourth quarter after Kipco (the Kuwait Projects Company) awarded its KD723 million ($2.4 billion) Hessah Al Mubarak project to the Ahmadiah Contracting & Trading Company, stated the country's top lender.

The project, which is situated in Al-Daiya area on the outskirts of Kuwait city, will be the country’s first mixed-used development. It will cover 381,000 sqm and include 82 plots for both residential and commercial spaces as well as infrastructure such as roads, parks and walkways.

Through its subsidiaries, Kipco will be developing 38 plots of the development scheme. The rest of the project will be developed by other parties, said the NBK in its report.

The project’s infrastructure is expected to be completed by September of 2017.

The first phase of the project, which will include residential properties developed by KIPCO’s subsidiaries, should be ready for habitation by 2020, stated the report.

On the Power and water sector, NBK said the value of awarded projects came to KD28 million ($92 million) during the period, which is the lowest level this year.

However, there are major projects in the pipeline under the ownership of the Kuwait Authority for Partnership Projects (KAPP) that should result in at least KD 2.1 billion ($7.1 billion) in contracts awarded over the upcoming quarters.

In the third quarter, KD572 million ($1.9 billion) worth of projects were awarded. Some of the major projects include the development of the Northern Regional Road (to facilitate the growth of inter-regional and international trade with the GCC states), the 6.5-km-long Ring Road and the improvement of the Sheikh Jaber Al Ahmed Al Sabah Road.

Valued at KD52 million ($174 million), the project will serve as a back-up for the current terminal until the new terminal is completed. It is expected to accommodate about 4.5 million passengers a year and all the departure and arrivals facilities as well as a 1,600 vehicle capacity parking lot, stated the report.

Another KD572 million ($1.9 billion) worth of projects is expected to be awarded in the fourth quarter in this sector, it added.-TradeArabia News Service