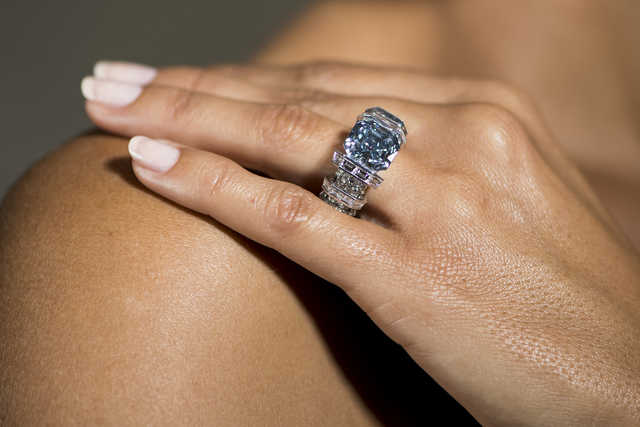 A rare blue diamond will be the highlight of Wednesday's Geneva autumn jewel auctions, as Sotheby's eyes sales in excess of $100 million (93m euros).

Rival auction house Christie's opened the season on Tuesday with 167 lots that sold for $97m, beating its pre-auction estimate of $80m.

Sotheby's will aim to top that by cashing in on the feverish demand for coloured stones.

The highest seller is likely to be the Sky Blue ring, an 8.01-carat blue diamond in a Cartier setting.

Sotheby's has valued the ring at $15-25m, well short of the astonishing $57.54m Christie's fetched in May for the 14.62-carat "Oppenheimer Blue", which remains the world record.

Tobias Kormind, head of the 77 Diamonds firm that tracks the global diamond market, said interest in coloured stones should remain strong on Wednesday at the five-star Hotel Beau Rivage on Lake Geneva, even if no records are at stake in the Sotheby's sale.

"Given the rarity of blue diamonds of this size and quality which have ever been unearthed, you'd expect every auction of this kind to be a dogfight," Kormind said.

Sotheby's is also offering a parure featuring diamonds once owned by Russian empress Catherine I that were given to her by her husband, czar Peter the Great, who led Russia until his death in 1725.

In 1711, Catherine was worried that a raging conflict with the Ottoman Empire posed huge risks to Russia and told her husband to draft a peace treaty, Sotheby's said, citing historical records.

Catherine sent the peace proposal and all the jewels she was travelling with to the Ottoman Sultan Ahmed III.

The Sultan "accepted these and was obviously delighted, and the truce was given and the (Russian) empire was saved", David Bennett, head of Sotheby's International Jewellery Division, said.

The parure featuring Catherine's diamonds is valued at $3 to $5m.

Also going under the hammer is a diamond necklace with a detachable clasp owned by empress Catherine II – Catherine the Great, who ruled Russia from 1762 to 1796, also valued at up to $5m.

"Historical, especially, royal provenance can add significant value to a jewel at auction, sometimes way beyond the jewel's inherent market value," Kormind said in an email.

He recalled La Peregrina pearl, which in 2011 sold for $11.8m – four-times above its pre-auction estimate.

The pearl's value was driven up because it had been a 16th Century engagement gift from Spain's Philip II to England's Mary Tudor, and was later owned Hollywood icon Elizabeth Taylor.