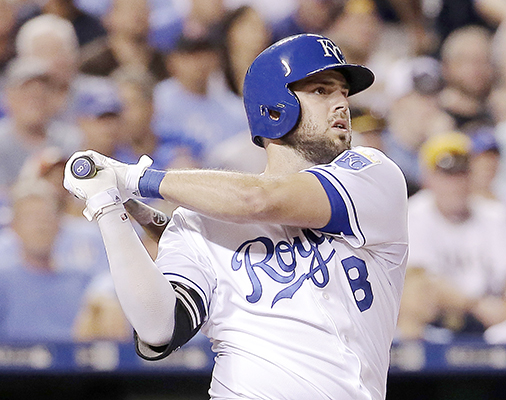 Kansas City, Missouri: Kansas City’s Edinson Volquez pitched effectively into the eighth inning against his old team to steer the Royals to a 5-1 win against Pittsburgh on Wednesday, stretching their already healthy lead in the American League Central standings.

The Royals moved 7-1/2 games clear of struggling division rival Minnesota which lost again to the surging Los Angeles Angels, who have emerged as the form team in the American League.

In the National League, St Louis continues to set the pace with a tight interleague win at the Chicago White Sox, while Washington also had a narrow victory over the New York Mets to eke out their lead in the NL East.

Volquez (9-5), who won 13 games last season for the Pirates, picked up his first victory in a month for the Royals. He allowed only one run and one walk while striking out eight.

Despite his efforts, the game remained tight until Mike Moustakas hit a three-run homer with two out in the eighth. Pittsburgh pitcher Charlie Morton was ahead 3-0 in the count but still gave Moustakas a pitch he was able to drive into the Royals’ bullpen.

Los Angeles closer Huston Street earned his 300th career save as the Angels beat Minnesota 5-2 and stretched their winning streak to seven games.

The Angels briefly trailed for the first time during their streak in the third inning but reclaimed the lead later in the inning.

Kole Calhoun had three hits and drove in two runs, while Chris Iannetta homered and Albert Pujols had an RBI double for Los Angeles, which inflicted a fourth straight loss on the Twins.

St Louis’ Yadier Molina hit a bases-loaded triple with two outs in the eighth inning, sending the Cardinals to a 3-2 victory over the White Sox.

A single, hit by pitch and catcher’s interference call loaded the bases, and Molina came up with his third hit of the game. It was the first triple for the All-Star catcher in four years.

Chicago had a chance to respond in the bottom of the eighth, getting runners on first and third, but Kevin Siegrist produced a strikeout to end the threat.

Washington’s Michael Taylor had a tying two-out, two-run single in the eighth inning and Danny Espinosa followed with an RBI double as the Nationals rallied from three runs down to beat the New York Mets 4-3.

In danger of having their lead over the Mets in the NL East cut to one game, Washington responded with a key hit by Taylor, who earlier drove in the Nationals’ first run.

A wild pitch from Bobby Parnell (1-1) put runners on second and third in the eighth and Taylor ripped a full-count fastball to tie it. Taylor then stole second before Espinosa came up with the winning hit.

Having used their bullpen for 9 1-3 innings over the first two games of the series, the NL West-leading Dodgers were hoping Bolsinger (5-3) would pitch past the sixth for the first time in his past eight starts.

He did so, retiring 14 straight batters before issuing a two-out walk in the seventh.

Los Angeles scored all its three runs in the fifth inning.

New York closer Andrew Miller gave up a solo homer to Chris Davis with two outs in the ninth but then struck out Jonathan Schoop for his 22nd save in 22 tries.

Houston’s Preston Tucker homered twice and drove in three runs to power the Astros past Boston 4-2.

Tucker made it 1-0 with his homer in the first, Evan Gattis hit a solo shot in the fourth and Tucker’s 2-run shot pushed the lead to 4-0 in the fifth.

San Francisco’s Brandon Belt hit a tying solo home run in the sixth inning and Buster Posey hit a go-ahead, two-run double in the seventh to lead the Giants past San Diego 7-1.

Matt Cain pitched six strong innings in his fourth start of the season for the defending World Series champions, who have won eight of nine to keep up the pressure on NL West leader Los Angeles.