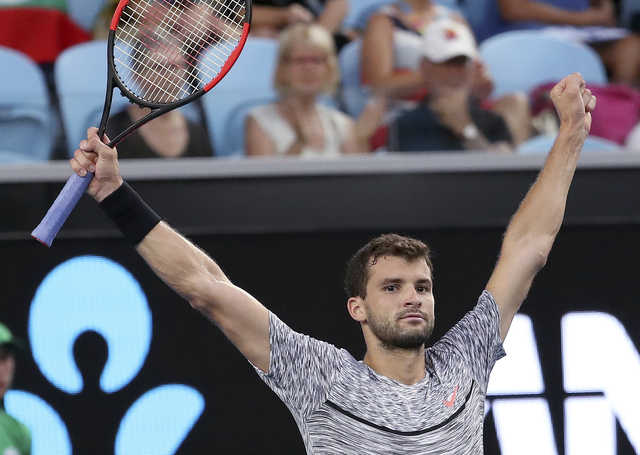 Dimitrov will face Belgian 11th seed David Goffin for a place in the semi-finals in the lower half of the draw.

His game deteriorated after losing a second-set tiebreaker and he had trouble getting around the court as Dimitrov charged to victory.

"Denis deserves all the credit for an unbelievable tournament, he has been on fire and he was striking the ball so well early in the match," Dimitrov said.

"I felt well physically during the match and winning the tiebreak was a turning point. I was confident after that."

Istomin began well with a double break to sail through the opening set in 26 minutes with Dimitrov off-range with his groundstrokes, as the Uzbek threatened a fresh upset.

But Dimitrov got more into the match in the second set, winning the key tiebreaker holding four set points.

Istomin, who had been applying ice packs to his upper legs through the opening two sets, had treatment at the changeover for lower back trouble.

Istomin often winced in pain as he played his shots, and he dropped his opening service in the fourth set as Dimitrov quickly wrapped up the match.

Dimitrov lost to Rafael Nadal in the quarter-finals in Melbourne three years ago and last year he fell to Roger Federer in the third round.

Dimitrov also reached the semi-finals at Wimbledon in 2014 where he lost to Novak Djokovic after defeating defending champion Andy Murray in the quarter-finals.

Istomin, who qualified via the Asia wildcard play-off, beat Ivan Dodig and Pablo Carreno Busta, as well as Djokovic, to reach the fourth round, equalling his best Grand Slam result.