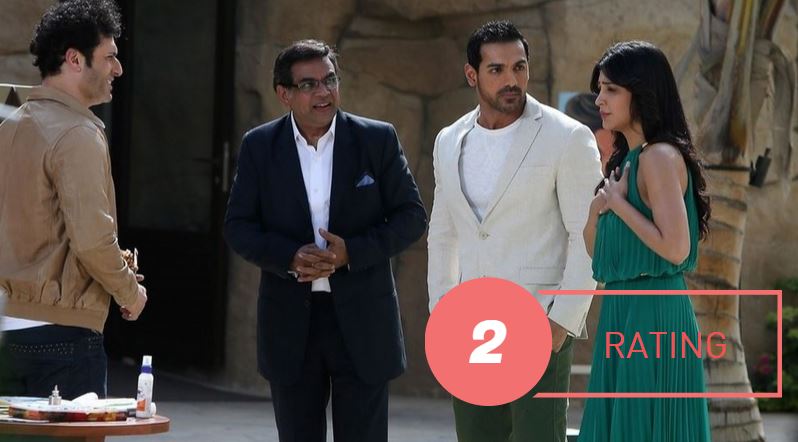 Loud and relentless: that is the approach to comedy that director Anees Bazmee favours. Needless to say, his films are not for sensitive palates. 'Welcome Back', a sequel to 2007's 'Welcome', is no different.

The film delivers a trashy complement of flamboyantly mounted musical set pieces, predictable comic gags, locations designed to dazzle the eye, and a bunch of characters who resort to excess at the slightest provocation.

All that 'Welcome Back' ends up doing is numb the mind in ways that one thought were not possible anymore, given the changes the Mumbai movie industry has seen in the seven years since the original Welcome was released.

Anil Kapoor and Nana Patekar are back in their respective roles as Majnu Bhai and Uday Shetty. Still bachelors, they have turned their backs on the world of crime and become legit entrepreneurs.

The duo is desperate to end their single status. Enter Maharani Padmavati of Najafgarh (Dimple Kapadia) and her daughter, Rajkumari Chandni (Ankita Srivastava).

Her eyes on their enormous wealth, the princess romances both Uday and Majnu. But their canoodling is rudely disrupted when Uday Shetty's dad (Nana Patekar again) surfaces to reveal the existence of a daughter (Shruti Haasan) from his third wife.

The maharani sets a condition: her daughter will not wed until Uday's sister is married off. So the ex-gangsters go scurrying in search of a match for the girl.

In walks Ajju Bhai (John Abraham), a bone-crunching gangster who believes in letting his might do most of the talking for him. He falls in love with Uday's sis, but the brothers are looking for a decent boy, not another goon.

The rigmarole that ensues leads all the characters, including Ajju's stepdad Doctor Ghungroo, to an island owned by a blind mafia don, Wanted Bhai (Naseeruddin Shah).

The climax of 'Welcome Back' unfolds in the desert and is as mindless as everything else in the movie.

By this point, it ceases to matter who is gunning for whom. It is a free-for-all in which Wanted Bhai and his son Honey (Shiney Ahuja) are forced to fight off the hostility of the rest of the bunch.

Some of the punch lines in 'Welcome' Back do hit home and a few of the gags are actually funny. But they do not add up to a genuinely and consistently comic action flick.

It is good to see both Anil Kapoor and Nana Patekar enjoying themselves to the hilt. If only the pair had a better screenplay to ride on, they might have pulled off a miracle.

John Abraham, stepping into Akshay Kumar's shoes, gets a lot to do. He is both a scowling action star and a soft romantic hero in 'Welcome Back'. But in the final analysis, his presence does not add much value.

The trouble with 'Welcome Back' is that springs no surprises at all. It is like watching a film from the last decade. All its tropes are both familiar and predictable.

So, should the red carpet be rolled out for 'Welcome Back'? No.

Watch it only if banal buffoonery of this kind does not put you off.