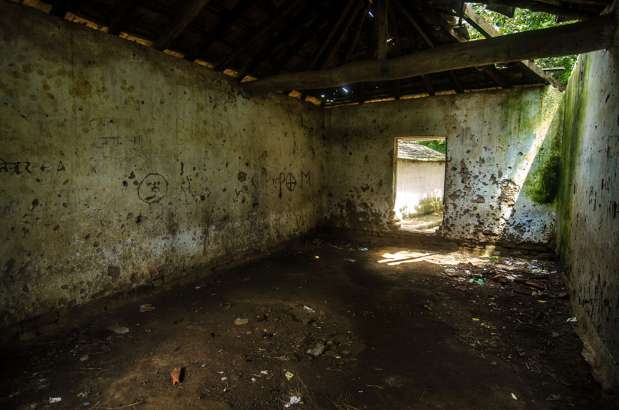 The abandoned room at the Kanjia assembly point bears witness to the barbaric murder of five middle-aged women accused of being witches and practicing black magic resulting in the death of a 17 year-old boy, in Kanjia village of eastern Jharkhand state. (AFP Photo)

New Delhi: As he recovers in a children's shelter in eastern India, 17-year-old Ganita Munda is haunted by the sound of his family's screams as a witch-hunting gang killed them in their home.

The teenager remembers breaking free of the attackers and fleeing his rural village home in Orissa state to a nearby forest where he hid alone in the dark for hours.

"I shouldn't be here. I still don't know how I managed (to survive)," Ganita told AFP of the July attack that left his parents and four of his brothers and sisters dead, including one as young as three.

The knife-wielding villagers targeted the family because Ganita's mother had been branded a witch, blamed for a recent outbreak of illness among local children.

The attack is one of many recorded every year in deeply superstitious rural India, and authorities have been criticised for failing to curb the problem.

A mob of villagers chanting "kill the witch" attacked Ganita's family in a remote and impoverished area of Orissa state where the belief in black magic is prevalent.

"They blamed her for casting evil spells on young children who were ill," said Ganita, whose nine-year-old brother Shambhunath also survived.

"I somehow wriggled out of their grip," Ganita said from the home in Keonjhar district where he is recovering from a knife wound to the stomach sustained during the attack.

Around 160 murders linked to witchcraft were recorded in 2014 across 13 of India's states, 32 of them in Orissa, according to the latest government figures. The numbers have remained steady in recent years, with about 2,300 people, mostly women, killed in such attacks since 2000. 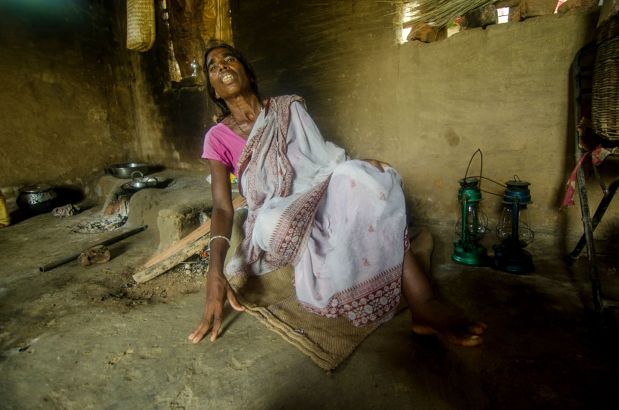 Surseri Mandal, 72, who was blamed for practicing witchcraft after the residents of Dumra suspected that her evil spirit led to the death of a cow in the village, sits at an abode in Dumra village of eastern Jharkhand state. (AFP Photo)

The issue made international headlines in August when five women were dragged from their homes and beaten to death in neighbouring Jharkhand state.

Twenty-seven people were arrested over those killings, which happened after a self-proclaimed doctor declared the "witches" were casting evil spells that had caused several villagers' deaths.

"It continues to thrive because of people's strong belief in such remote areas that any illness, crop damage, loss of animal life or personal setback is somehow linked to the occult, witchcraft or kalajaadu (black magic)," Bijay Kumar Sharma, one of Orissa's most senior police officers, told AFP.

Sharma is charged with enforcing a specific law, introduced in Orissa last year, designed to tackle and reduce the number of crimes against people accused of witchcraft.

Other states have passed similar bills, including in remote, northeast Assam last month, which include jail terms and fines for branding someone a witch and for taking part in attacks against them.

But experts say laws alone are not enough, and are pressing for better education to combat the superstitions driving the violence.

"Ignorance about issues related to health, justice, agriculture or husbandry are at the root of why people become victims to such acts," rights activist Sashiprava Bindhani told AFP from Orissa's capital Bhubaneshwar.

Rapidly modernising India has also ignored many dirt-poor areas home to mainly tribal or indigenous groups where most of the witchcraft-linked crimes occur.

In these areas where basic social services like modern medical clinics are lacking, some villagers continue to turn to quack doctors who sometimes lay the blame for an unexplained misfortune or illness on black magic.

"Lack of information and access to basic services has to be corrected to address the problem," Bindhani said. 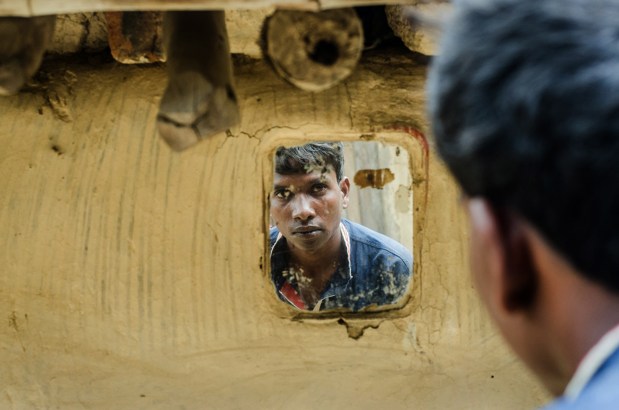 Sukmar Khalkho, 19, the son of Itwariya Khalko who was recently murdered in Kanjia village after being accused of practicing witch-craft and bringing upon the death of a 17 year old youth, looks in a mirror at an abode in Kanjia village of eastern Jjarkhand state. (AFP Photo)

Witchhunting is also used as an excuse to settle family feuds and land disputes. It is women who are mostly targeted in the deeply patriarchal villages where they are falsely accused of being witches by those with a score to settle.

Village councils then hand down punishments, including rape, public beatings and being forced to eat excreta, with the women unable to appeal.

"There are many who are targeted, ostracised and face other punishments after being branded witches. This is equal to death for them. But such cases are never reported," said Shashank Shekhar Sinha, who is writing his second book on the subject.

For Ganita, the four hours he spent in the forest listening to his family's cries for help were the "longest, most scary" of his life.

The following morning a resident of a nearby village found him and took him to a police station.

Police official Sharma said ten people have so far been arrested over the attack.

But Ganita cares little for the investigation. With no formal schooling and almost no surviving family, his future is bleak.

"Now he can never return to that village or the life he knew," said Biplab Mishra, project director with local NGO Prakalpa, currently charged with his care.

Once Ganita turns 18, however, he knows what he has to do. "I will start working and take my brother and move to some place far away."