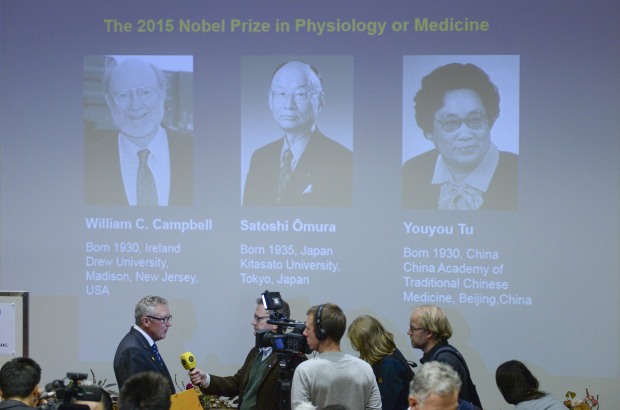 The Nobel judges awarded the prize to Irish-born William Campbell, Satoshi Omura of Japan and Tu Youyou, the first ever medicine laureate from China. (AP Photo)

Stockholm: Three scientists from the U.S., Japan and China won the Nobel Prize in medicine on Monday for discovering drugs to fight malaria and other tropical diseases that affect hundreds of millions of people every year. Tu Youyou — the first-ever Chinese medicine laureate — was cited for discovering a drug that's now the primary treatment against malaria, saving millions of lives worldwide. Inspired by Chinese traditional medicine, she made her discovery while working on an anti-malaria project for the Chinese military.

She will share the 8 million Swedish kronor (about $960,000) award with Japanese microbiologist Satoshi Omura of Japan and William Campbell, an Irish-born U.S. scientist, who made discoveries that have raised hopes of eradicating river blindness and lymphatic filariasis. Those diseases are caused by parasitic worms and affect millions of people in Africa and Asia.

The Nobel committee said the winners had given humankind powerful tools to combat debilitating diseases that affect hundreds of millions of people annually.

"The consequences in terms of improved human health and reduced suffering are immeasurable," the committee said.

Campbell, 85, is a research fellow emeritus at Drew University in Madison, New Jersey. Omura, 80, is a professor emeritus at Kitasato University in Japan and is from the central prefecture of Yamanashi. Tu, 84, is chief professor at the China Academy of Traditional Chinese Medicine.

River blindness is an eye and skin disease that ultimately leads to blindness. About 90 per cent of the disease occurs in Africa, according to the World Health Organisation.

Lymphatic filariasis can lead to swelling of the limbs and genitals, called elephantiasis, and it's primarily a threat in Africa and Asia. WHO says 120 million people are infected with the disease, with about 40 million disfigured and incapacitated.

Campbell, a retired scientist who spent 33 years at pharmaceutical company Merck and now lives in North Andover, Massachusetts, said the award came as a huge surprise.

"It was a great team effort by the people at Merck and Company," Campbell said.

Omura wondered whether he deserved the prize.

"I have learned so much from microorganisms and I have depended on them, so I would much rather give the prize to microorganisms," Omura told Japanese broadcaster NHK.

He later said that the drug was developed from substance taken from microbe contained in the soil sample at a golf course near Tokyo. Omura said he always carries around a plastic bag in his wallet so he can collect soil samples.

Omura isolated new strains of Streptomyces bacteria and cultured them so that they could be analysed for their impact against harmful microorganisms, the Nobel committee said.

Campbell showed that one of those cultures was remarkably efficient against parasites in animals. The bioactive agent was purified and modified to a compound that effectively killed parasitic larvae, leading to the discovery of new class of drugs.

As a junior researcher, Tu was recruited by the Chinese government to work on a military project in 1969 to find anti-malaria drugs. She turned to herbal medicine to discover a new anti-malarial agent in an extract from the sweet wormwood plant. The agent, artemisinin (pronounced ar-tuh-MIHS'-ihn-ihn), was highly effective against malaria, a disease that was on the rise in the 1960s, the committee said.

Malaria is a mosquito-borne disease that still kills around 500,000 people a year, mostly in Africa, despite efforts to control it.

Colin Sutherland, reader in parasitology at London School of Hygiene and Tropical Medicine, said that the impact of artemesinin had been profound. It's so widely used across the world that there's a risk of resistance problems.

"The writing is on the wall already. We probably have about five to 10 years of effective use of artemesinins before resistance becomes a problem," he said.

WHO says artemisinin resistance has already been confirmed in Cambodia, Laos, Myanmar, Thailand and Vietnam.

There have been several previous Nobel Prizes for malaria research, including the 1902 award to British army surgeon Ronald Ross, who discovered the disease is transmitted by mosquitos.

The last time a Chinese citizen won a Nobel was in 2012, when Mo Yan got the literature award. But China has been yearning for a Nobel Prize in science. This was the first Nobel Prize given to a Chinese scientist for work carried out within China.

"This is indeed a glorious moment," said Li Chenjian, a vice provost at prestigious Peking University. "This also is an acknowledgement to the traditional Chinese medicine, for the work began with herbal medicine."

Stephen Ward, deputy director of Liverpool School of Tropical Medicine, said the prize confirms that Chinese scientists "did fantastic work in the 1960s even when they were effectively ignored by the rest of the world."

The medicine award was the first Nobel Prize to be announced. The winners of the physics, chemistry and peace prizes are set to be announced later this week. The economics prize will be announced next Monday. No date has been set yet for the literature prize, but it is expected to be announced on Thursday.

Besides the cash prize, each winner also gets a diploma and a gold medal at the annual award ceremony on Dec. 10, the anniversary of the death of prize founder Alfred Nobel.