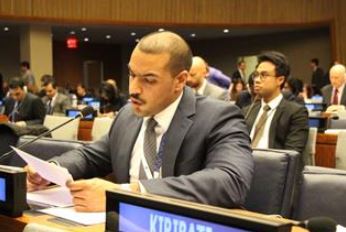 Kuwait City: Kuwait stressed importance on multilateral work being the ideal path to encounter disarmament and non-proliferation challenges and the severe consequences of utilising such weapons.

This came in the speech of the Third Secretary of Kuwait's permanent delegation to the United Nations (UN) Ibrahim Al-Dai' before the disarmament and international security (first Committee) as part of the 72nd session of the United Nations General Assembly held on Thursday night.

Kuwaiti diplomat tackled various means of disarmament, calling on the international community to exert further efforts and promote related political will to reach a world free of nuclear and mass destruction weapons.

Al-Dai' expressed his disappointment over the stalemate status of disarmament conference, which reflected the absence of political will for many nations worldwide despite its importance and critical issues its agenda includes.

However, Kuwait welcomes the positive development the previous disarmament and international security (first Committee) session showed, calling on all state members to actively participates in reaching an international agreement regarding the goals of the current session, he said.

Al-Dai' expressed hope to hold a high-profile meeting for the UN General Assembly regarding disarmament of nuclear weapons by 2018.