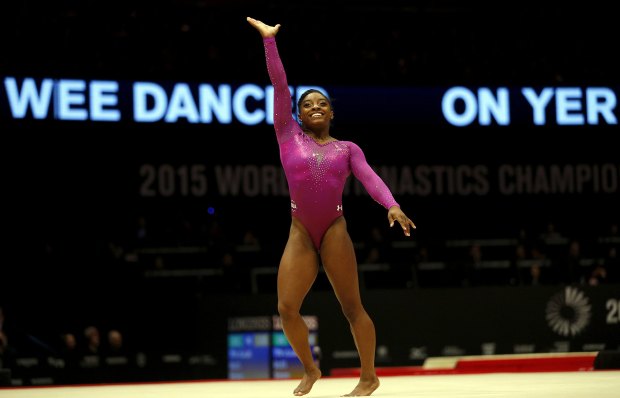 Glasgow: Japan's Kohei Uchimura and US teen Simone Biles completed a golden week in Glasgow as they both claimed a tenth world gold on the final day of the world gymnastics championships.

Biles, 18, defended her beam and floor titles to bring her tally to four gold in the Hydro Arena after helping the United States defend their team title and winning a record third straight all-around gold.

Her four world titles brought her tally to ten as the tiny Texan become the most-titled woman gymnast in history.

"Oh my gosh, I did it," beamed the teenager. "It feels amazing to redeem myself after the all-around final (where she nearly fell on balance beam).

"The highlight of these championships is my beam. If I was told that I would be two-time (world) beam champion, I wouldn't have believed it."

She finished her championships in style with an amazing gravity-defying acrobatic display on the floor including her "Biles" double layout with 1/2 turn to score 15.800 and take gold ahead of Russia's Kseniia Afanseva (15.100) and fellow American Margaret Nichols (15.000).

Earlier she somersaulted to a successful defence on the beam scoring 15.358 to finish with a 1.025 margin on Sanne Wevers of the Netherlands with Germany's Pauline Schaefer winning bronze.

She nearly fell off the apparatus on her way to all-around gold, but made no mistake this time, landing solidly with a double somersault.

Biles also took bronze on the vault this week to give her 14 world medals over three world championships,

The 26-year-old trails Belarusian Vitaly Scherbo who has won 12 world titles and 23 medals.

He had fallen off the apparatus during the men's team final when he helped Japan capture a first title 1978 but held firm this time leading the way with 15.833 ahead of American Danell Leyva (15.700) and Cuba's Manrique Larduet (15.600).

The Chinese men got their only gold on the final day when You Hao won on the parallel bars ahead of defending champion Oleg Verniaiev of the Ukraine with Deng Shudi of China and Oleg Stepko of Azerbaijan sharing bronze.