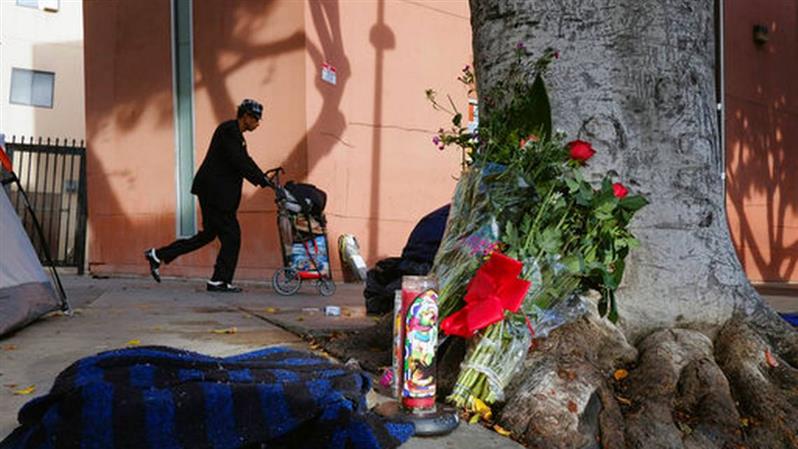 A pedestrian walks past flowers and candles placed on a sidewalk near where Charly Keunang, a homeless man was shot and killed by police in the Skid Row section of downtown Los Angeles. A jury has found the two Los Angeles police officers liable for damages in the fatal 2015 shooting. (AP Photo)

Los Angeles agreed on Thursday to pay $2 million to settle a civil lawsuit over the fatal police shooting of a homeless man in 2015 that went viral in an online video and fueled a U.S. debate on police tactics, a lawyer for the man's family said.

The settlement came shortly after a federal jury in Los Angeles found that two police officers in the civil suit were liable for the death of 43-year-old Charly "Africa" Keunang, said Dan Stormer, a lawyer representing Keunang's family.

"The defense made an offer which we accepted. It was $2 million," Stormer said in telephone interview.

The eight-person jury found that Officer Francisco Martinez had used unreasonable force against Keunang and that his superior, Sergeant Chand Syed, had failed to intervene, Stormer said.

The jury cleared a third officer, Daniel Torres, in the deadly March 2015 incident.

A spokesman for the Los Angeles Police Department said it would not comment on a civil lawsuit. A spokeswoman for Mayor Eric Garcetti had no immediate comment.

Keunang, a native of Cameroon, was shot as he scuffled with officers responding to a report of an attempted robbery outside a Union Rescue Mission in Los Angeles' Skid Row, a downtown area with one of the highest concentrations of homeless people in the United States.

Video footage of the incident highlighted the often volatile interactions between law enforcement and the mentally ill and helped fuel a national debate over police tactics. It also drew calls for reform from local civil rights activists.

The Los Angeles district attorney's office declined to charge the three officers. It said in a 2016 report that they were justified in using lethal force because Keunang had nearly gotten hold of an officer's holstered gun as they fought.

The mission's director said after the shooting that Keunang had a history of violent, erratic behavior. He also had served time in prison for bank robbery, according to court records.