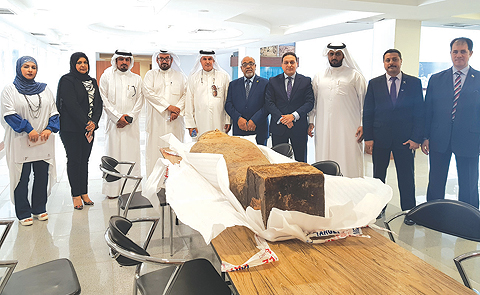 Kuwaiti authorities have handed over to Egypt the lid of a rare antique coffin that had been smuggled into the Gulf state last March, according to KUNA.

The vintage casket lid was given to the Egyptian embassy after Kuwait’s National Council for Culture, Arts and Letters completed a probe into how the relic was smuggled into the country.

The lid is believed to have belonged to a sarcophagus, a decorative coffin in which ancient Egyptians buried their dead.

“National laws strictly prohibit the looting of antiquities given the fact that such historic treasures constitute an integral part of any nation’s culture,” Dr Sultan Al Duweish, director-general of the government body, told Kuwait News Agency.

He said that Kuwait will never be involved in the “black market trade in antiquities”, citing numerous deals sealed with the United Nations Educational, Scientific and Cultural Organization (UNESCO) to bring that goal to fruition.