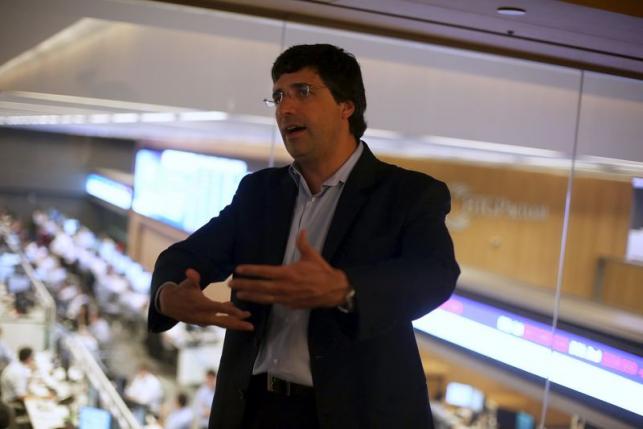 Esteves is pictured during an interview in Sao Paulo. (Reuters File Photo)

The chief executive of Brazil's biggest independent investment bank and the leading senator in the governing coalition were arrested on suspicion of obstructing the country's most sweeping corruption investigation ever.

The detention of such prominent power brokers on orders from the Supreme Court raised the stakes dramatically in a bribery scandal that started with state-run oil company Petrobras and now threatens the heights of Brazilian banking and politics.

The arrest of André Esteves, the billionaire chief executive and controlling shareholder of BTG Pactual SA and Brazil's most influential dealmaker, sent the bank's listed shares into a dive that wiped out a third of its market value and raised red flags at the central bank.

Brazil's Congress also ground to a halt with the arrest of ruling Workers' Party senator Delcidio do Amaral, a veteran lawmaker who has run the economic affairs committee and who has been key to President Dilma Rousseff's unpopular austerity programme.

Brazil's currency fell as much as two per cent as the scandal threatened the country's sixth-largest bank and the president's sputtering efforts to pass a new budget and avoid another credit ratings downgrade to junk.

Brazil's central bank said it was monitoring the arrest of Esteves to see whether it would impact operations at BTG Pactual and trigger regulatory action.

Banking analysts warned that the six-year-old BTG Pactual, the largest independent investment bank in Latin America, could struggle to navigate Brazil's worst recession in a quarter century without its wunderkind founder at the helm.

The political gridlock that has obstructed economic policy this year is also likely to worsen with the jailing of Amaral, one of about 50 Brazilian politicians under investigation for their alleged roles in a vast kickback scandal at the oil giant known as Petroleo Brasileiro SA.

Amaral's arrest was the first ever for a sitting senator in Brazil and it sent shockwaves through the capital. The senator's lawyer declined to comment and said he would release a statement later in the day.

Senate leader Renan Calheiros said Congress would suspend its sessions as senators met to weigh their response. Under Brazil's constitution, the Senate can approve or overturn the Supreme Court decision to arrest a senator.

Prosecutors alleged that Amaral conspired to help Cervero flee authorities. They also said the senator offered a monthly stipend to the former executive's family, financed by Esteves, who had obtained a copy of a plea bargain based on Cervero's testimony.

Cervero was sentenced in August to 12 years in prison for corruption and money laundering in connection to bribes paid on two drillship contracts. Another defendant in the case testified that Cervero had passed bribe money to Amaral skimmed from Petrobras' controversial 2006 purchase of a refinery in Pasadena, Texas.

BTG Pactual confirmed the arrest of its chief executive and said the bank was available to cooperate with the investigation.

Esteves' lawyer, Antonio Carlos de Almeida Castro, told reporters that the banker "certainly" had not acted to obstruct the investigation.

The bank's listed units, a blend of shares in its investment banking and private equity divisions, tumbled as much as 39pc to an all-time low on the Sao Paulo stock exchange before paring losses to 29pc.

Court representatives said Esteves had been arrested temporarily for five days, with a potential extension of five days. Amaral was arrested for an indefinite period.

Esteves, 47, has drawn on powerful connections in politics and global finance to steer BTG Pactual through turbulent times as Brazil's economy plunged into a sharp recession.

BTG Pactual's major deals with Petrobras have drawn the attention of investigators, including the bank's stake in Sete Brasil Participacoes SA, a supplier of oil-drilling platforms that has been swept up in the probe. BTG Pactual also bought a stake in Petrobras' Africa unit a few years ago.

Last quarter, credit to oil and gas and infrastructure companies, which are the most impacted industries in the widening graft probe, accounted for about 16pc of BTG's loan book. That is the largest exposure among Brazil's listed traded banks.

Brazil's central bank said in a press statement that it was monitoring the arrest of Esteves, adding that BTG Pactual has solid liquidity indicators and continues to operate normally.

Esteves has been worth about $2.2bn, according to Forbes Magazine.