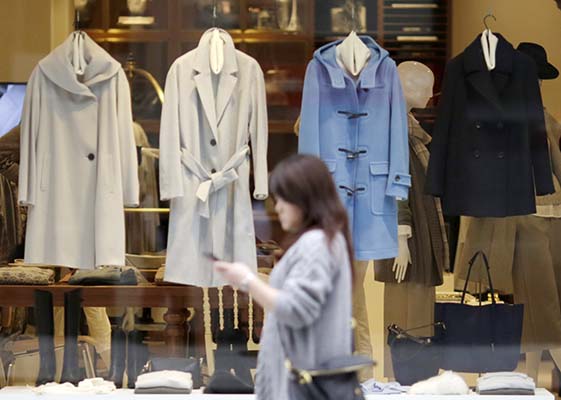 The data underlines the difficulty Abe faces as he campaigns for companies to spend more of their record profits on wages and investment, in the hope of pulling Japan out
of recession.

“It’s quite difficult to generate a positive economic cycle just by applying political pressure on companies.”

The jobless rate fell to 3.1 per cent in October from 3.4pc in September, hitting the lowest level since 1995, government data showed yesterday.

The decline was predominantly due to the effect of falling energy costs, which the Bank of Japan (BOJ) has said it will look through in determining whether additional monetary easing is necessary to achieve the inflation target.

The BOJ’s new indicator that strips away the effect of energy costs showed consumer prices rose 1.2pc in the year to October, underscoring its view a broad uptrend in prices was intact.

Japan relapsed into recession in July–September and consumer prices have slid on oil price falls and weak household spending, casting doubt on the BOJ’s view that a solid economic recovery will accelerate inflation to its 2pc target by early 2017.

Nearly half the analysts polled by Reuters expect the BOJ to increase monetary stimulus in January, when continued declines in oil costs may force the central bank to cut its quarterly inflation forecasts yet again.

“It’s important for people to realise that the government is focused on achieving the virtuous cycle of growth and helping people who have not benefited so far,” Economics Minister Akira Amari told reporters yesterday.

Japanese Prime Minister Shinzo Abe yesterday made a widely expected decision to roll out additional stimulus spending – the latest attempt by Tokyo to revitalise a sputtering economy that has failed to break out of decades of stagnation.

Abe directed his cabinet to compile an extra budget for the current fiscal year, which will include support for rural areas hit by the Trans-Pacific Partnership (TPP) free-trade deal, and cash payouts to low-income groups to spur private consumption.

“While aiming to achieve our goal of halving the primary budget deficit this fiscal year, we will compile measures that will lead directly to resolve problems Japan faces,” Finance Minister Taro Aso said after a cabinet meeting.

The instruction came after the government this week unveiled two packages of steps aimed at tackling Japan’s shrinking population and easing farmers’ worries over the TPP deal.

The extra budget will focus on these measures as well as other urgent steps such as disaster restoration and payouts to low-income households, Aso
added.

Abe’s cabinet later in the day approved an outline of next fiscal year’s budget, which came in line with a draft obtained by Reuters last week.

“We will make a progress on the both aims of defeating deflation, revitalising the economy and restoring public finances from the next fiscal year,” Abe told his top economic advisory panel.

The government has not decided on the size of the extra budget but sources told Reuters last month that a supplementary budget worth over 3.1 trillion yen ($25.29 billion) would be considered, without issuing extra bonds to fund the spending.

The extra budget will be compiled next month along with an annual budget for the next fiscal year starting in April 2016.

In the last fiscal year, the government compiled a 3.1trn yen supplementary budget.