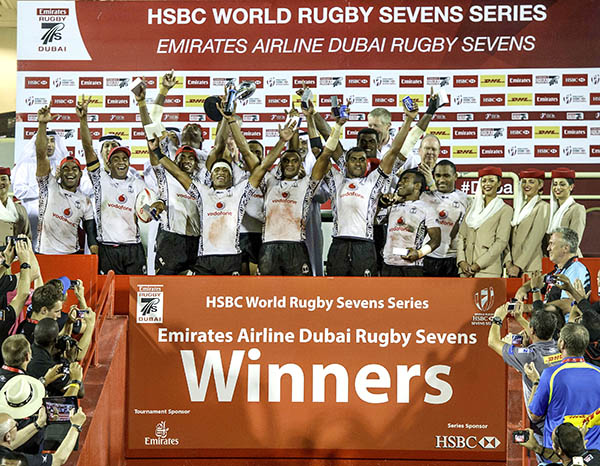 DUBAI: Fiji began the defence of its sevens rugby world series title by winning the opening-leg in Dubai in style, defeating England 28-17 in the final yesterday.

The scoreline flattered England as Fiji had its second Dubai Sevens title in three years secure by half-time, when it led 28-7.

Coach Ben Ryan said winning the series again was less of a priority than winning the Olympic gold medal in Rio de Janeiro in nine months, but taking the Dubai title meant they will try to keep the roll on.

“I thought we were a bit undercooked coming into this tournament, but (the title) always gives you a little bit more confidence when you know what (training) you’re doing back home is working,” Ryan said.

The Fijians, who conceded an early try to England, rushed in four tries in the three minutes before half-time.

Savenaca Rawaca burst past two defenders to storm in, Jasa Veremalua and Isake Katonibau followed in quick succession from the kickoffs, then man-of-the-tournament Jerry Tuwai, after the halftime hooter, stepped out of a crowd of defenders to sprint free. Just before the posts he was clobbered but managed to sit up and plunk the ball down.

Vatemo Ravouvou converted all four tries, and the result was effectively certain.

Tom Bowen scored a second try for England in the last spell, and teammate Phil Burgess went over in the last minute.

Fiji beat Australia 19-12 in the quarter-finals, and New Zealand 19-5 in the semi-finals.

England twice came from behind to overhaul the US 24-19 in the semi-finals.

The Americans knocked out Dubai defending champion South Africa 21-19 in the quarter-finals, and finished third by defeating New Zealand 31-12. They had never beaten the Kiwis before Dubai, but toppled them twice in the desert.

The series moves on next weekend to Cape Town, South Africa, the second event in the 10-leg series.