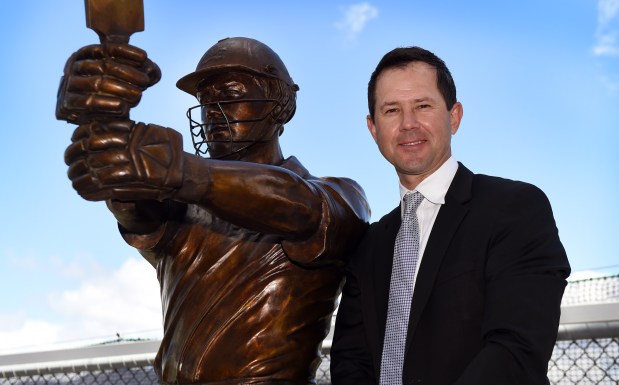 Ponting unveils a statue of himself in Hobart. Picture: AFP

Speculation has risen over Hobart's future as a Test venue amid fears that just 10,000 fans will attend the first four days of the first Test against the West Indies.

Hobart has hosted 11 Tests since its first against Sri Lanka in 1989, but the city is not on the annual rota of Test venues like the mainland Australian capital cities.

Ponting, who was honoured by the unveiling of a statue at his old Bellerive Oval home ground Wednesday, said that criticism of Hobart as a Test venue was unjust.

"I think some of the criticism has been a little unfair. What I would like to see happen here is that Hobart and Tasmania get a Test match every year," Ponting told reporters.

"It's really hard to make assumptions on Tasmanian cricket or people watching Test cricket in Australia when there is no continuity where the games are.

"The Tasmanian public are being judged on Test matches against lower-ranked teams. Let's have an Ashes Test here, let's have Tests against South Africa and India here and then we can start making some judgments and comparisons about other venues around Australia."

After 123,000 fans flocked to the first ever day-night Test in Adelaide last month, Ponting was asked if a Test under floodlights would reinvigorate Hobart.

"If that is what it's going to take down here, then absolutely," he said.

"If the attendances are down over the next few days down here, it might be what Hobart needs and it's already got unbelievable world-class facilities and lights."

Ponting, who is a member of the MCC World Cricket committee, said the future of Tests was one of the big questions facing the sport.

"I've been talking for the last few weeks with the World Cricket committee about Test match attendances around the world and how they are starting to fall away, which is why we saw a day-night Test match in Adelaide," he said.

"Australia is strong, but when we go to places like Sri Lanka, India and the West Indies that's when you start to see those numbers drop off," he added.

Ponting said a contributing factor was the recent retirement of some of cricket's leading stars.

"The other thing we have to think about is the real star players that were around the game five or six years ago have all retired at once," he said.

"There's no (Jacques) Kallis, there's no (Brian) Lara, there's no (Sachin) Tendulkar. These guys have all left the game in a quite recent period of time."