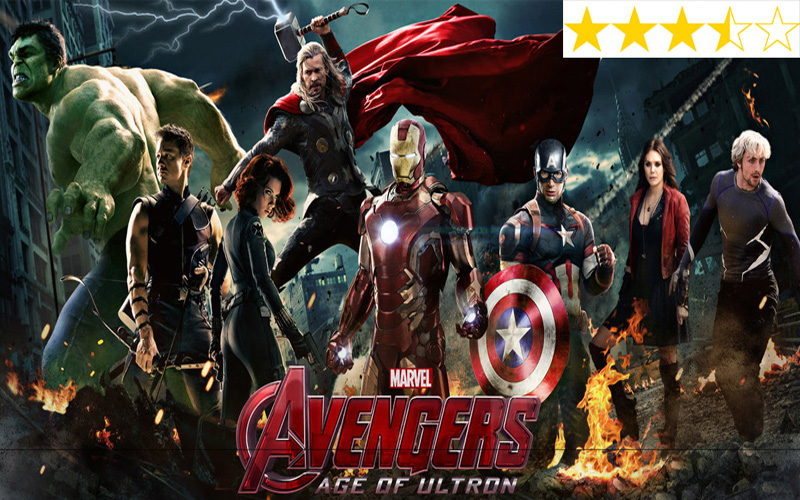 The different films that make up the Marvel Cinematic Universe – which include Iron Man, Captain America and Thor – have recently raised the bar for action films.

Consistently topping the box office and popular with fans and critics alike, the motley crew of superheroes that we were presented with in the first Avengers film gained wide appreciation.

Subsequent sequels for each of the heroes have been well-received, but it seems we’ve reached the inevitable point where ingenuity is swapped out for a formulaic script that the studio knows will yield box office stats.

Avengers: Age of Ultron starts with an action scene in an Eastern European country with the gang raiding a Hydra outpost, where humans have been experimented on using the sceptre previously wielded by Loki.

Two of these experiments are the Maximoff twins Pietro (Aaron Taylor-Johnson) and Wanda (Elizabeth Olsen).

While both Taylor-Johnson and Olsen do a good job in the film, the introduction of their characters is part of what’s wrong with this movie – the ensemble cast that was large to begin with becomes unwieldy.

There’s practically no character development in the film, which is an enormous shame, since the subtleties in these films often hold the best moments.

It is also riddled with one-liners beginning to end, which eventually makes the viewer want to roll their eyes instead of laugh – not exactly something a multi-million dollar franchise should aim for.

In the previous film, the beauty of the jokes and comic relief were their perfect timing.

In Age of Ultron, the jokes feel like they’re inserted without a thought for the film’s structure as a whole.

There are certainly jokes that work incredibly well and will draw huge laughs, but they would be made all the stronger if the weaker ones had been cut.

The most stunning thing about the film is the visuals – the special effects team have outdone themselves.

There are several action scenes where a slow-motion shot is inserted with the effect of a comic book strip, which is a great ode to the origins of the franchise. In the end, though, the most disappointing thing about the film is it is forgettable.

Having slept on it, I find I’m hard pressed to think of specifics that enthralled, other than the gorgeous graphics and a couple of strong lines that make you laugh.

Avengers: Age of Ultron is now screening at City Centre Bahrain, Seef, Saar, Al Jazira and Dana cinemas and has a running time of 141 minutes.