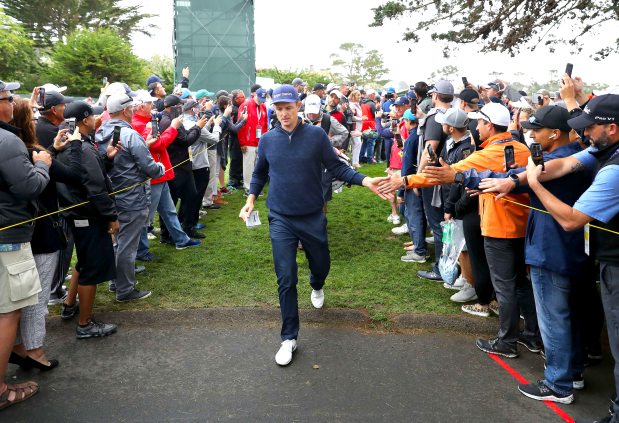 Justin Rose of England greets fans as he walks off the 14th hole during the second round of the 2019 U.S. Open at Pebble Beach Golf Links on June 14, 2019 in Pebble Beach, California. (Warren Little/Getty Images/AFP)

PEBBLE BEACH: Birdies were harder to come by at the US Open yesterday but a rock steady Justin Rose was able to collect two of them to increase his lead to three shots midway through the second round at a chilly Pebble Beach Golf Links.

Rose, the 2013 US Open champion, led by one shot overnight and added to his advantage with an error-free outward nine to take control of the leaderboard at eight-under.

He was three clear of Rickie Fowler, Xander Schauffele and South African Louis Oosthuizen, who are among the late starters.

Plundered by the world’s best on Thursday with 39 golfers getting under par there appeared to be no record low scores, like Rose’s 65, to be had from the scenic layout on Friday.

Englishman Rose, who matched the lowest round ever for a US Open played at Pebble Beach, was slow to heat up on an overcast morning as he opened with five straight pars before collecting his first birdie of day at the par four 15th.

Playing the back nine first, Rose added another at the 18th to open up a nice cushion heading into the turn.

Two other Pebble Beach headliners, twice defending champion Brooks Koepka and Tiger Woods, also had difficulty getting in gear on a gray day.

Koepka, bidding to become the first player in over a century to sweep three straight US Opens, reeled off six pars before picking up a birdie at 16 and then giving it back on 17 to remain at two-under and even par for the day through 11 holes.

Woods, who began the day five off the pace, came out firing by picking up a birdie on his second hole to move to two-under but then stalled through to the turn with seven pars.