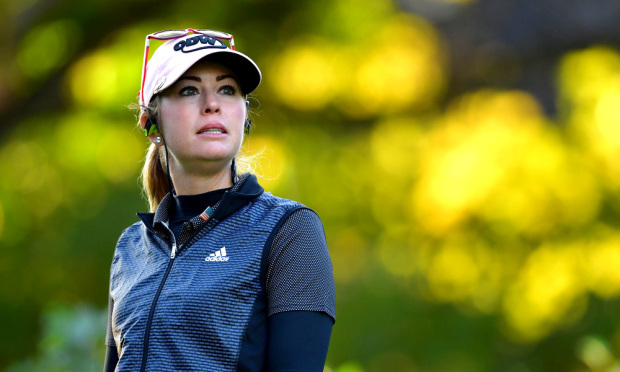 EVIAN-LES-BAINS, FRANCE - SEPTEMBER 14: Paula Creamer of USA looks on during the first round of The Evian Championship at Evian Resort Golf Club on September 14, 2017 in Evian-les-Bains, France. (Photo by Stuart Franklin/Getty Images)

Evian: Former US Open champion Paula Creamer produced one of her best rounds ever as she carded a 64 on the opening day of the Evian Championship, one of the five majors in the women’s calendar.

The 32-year-old showed considerable cool in yesterday’s French heatwave where temperatures were topping 35 degrees Celsius, shooting seven birdies in a bogey-free round to move one shot clear at the top of the leaderboard.

It is the first time she has led a major since she won the 2010 US Open at Oakmont. An injured wrist at the Evian two years ago led to a disrupted 2018 meaning Creamer now finds herself ranked 156 in the world.

Breathing down her neck are fellow American Brittany Altomare, who missed out to Anna Nordqvist in a play-off here two years ago, and the South Korean pair of Park Inbee and Ko Jin-young.

Seven-time major winner Park, 31, has won the other four majors but has yet to win the Evian.

Ko is also in great form after winning the ANA Inspiration in California in May which elevated her to number one in the world rankings for 12 weeks.

There was a particularly warm welcome for 34-year-old Ahn Shi-hyun, playing her first round at a major since 2011.

Concerns about the prospect of summer storms mean that today’s tee times have been moved forward by 30 minutes.