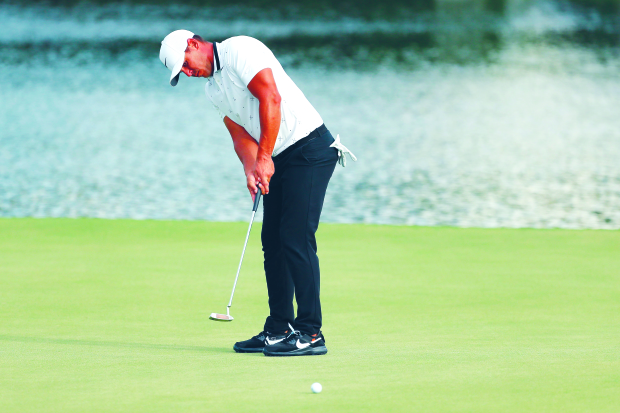 Brooks Koepka of the United States putts on the 15th green during the second round of the TOUR Championship at East Lake Golf Club on August 23, 2019 in Atlanta, Georgia. (AFP)

Atlanta, Georgia: Brooks Koepka missed an eight-foot eagle putt at the final hole but did enough for a one-stroke halfway lead over Justin Thomas and Rory McIlroy at the Tour Championship in Atlanta on Friday.

The tap-in birdie to end the second round lifted Koepka to a second successive three-under 67 as East Lake, particularly its gnarly rough, bared its teeth.

Koepka posted a 13-under total after starting the week as third seed at seven-under in the staggered scoring system and the race to win the record $15 million first prize.

Fellow American Thomas, the top seed who started at 10-under, shot 68, while Northern Irishman McIlroy had a 67.

Xander Schauffele, the 2017 champion, eagled the last for a 69 to trail by two strokes as the frontrunners separated themselves from the pack in the season-ending event.

World number one Koepka said his game was peaking nicely in a sobering warning to rivals.

“Game’s coming into form,” he said. “It’s been a struggle the last few weeks but I’ve found some stuff and I’m very pleased with where I’m at.”

Thomas, meanwhile, was pleased with his front nine, which included three birdies, though he stalled coming home after a short thunderstorm delay.

“I really, really played well,” said the winner of last week’s BMW Championship. “I feel I really didn’t get anything out of it. I had a hard time getting back into it after that weather delay.

“If I continue driving it like I did today I can really do some damage this weekend.”

McIlroy finished strongly with two straight birdies, rolling in a 15-footer before recovering from a poor tee shot at the par-five 18th for a tap-in.

American Chez Reavie had the day’s best score, a 64 that included a hole-in-one from 230 yards at the monster par-three ninth. He trailed by seven strokes.

Australian Adam Scott also had some fun, sinking a 65-foot putt at the 10th hole. It was not even the longest he made on the day, a 70-footer at the penultimate hole topping it.

The 2013 Masters champion could only laugh as he made the long walk to collect his ball from the cup.

The Australian trailed by eight shots.