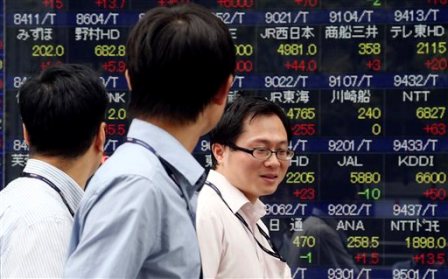 (Image for representational use only)

Tokyo: Tokyo stocks rose by the break Monday, extending a global rally as investors speculated over the possibility that central banks will unleash more stimulus to bolster hard-hit financial markets.

A bloodletting on major bourses since the start of the new year has stoked talk that policymakers will step in, with the Bank of Japan set for its first meeting of 2016 later this week.

Sentiment got a boost as European Central Bank President Mario Draghi said it would review its policies in March and could boost its stimulus.

"Investors expect not only the European Central Bank, but also that the Bank of Japan will expand stimulus," Shoji Hirakawa, chief equity strategist at Okasan Securities, told Bloomberg News.

"Japanese markets have dropped and recent leading economic data is not good, which goes a different way from the BoJ's expectations," opening the door for more potential easing, he added.

The BoJ will make a policy announcement Friday as weak growth and a drop in oil prices weigh on its attempts to lift inflation.

Still, it marked the fifth annual deficit, with inflation and other key indicators due to be released Friday.

In Tokyo share trading, Hitachi rose 0.48 percent to 605 yen as the leading Nikkei business daily said the firm would be involved in the construction of four nuclear reactors in Britain.

However, troubled auto parts giant Takata dived 9.94 percent after US safety regulators said Friday that recalls of the company's air bags would expand by millions more vehicles following a 10th death linked to the exploding devices.

The National Highway Traffic Safety Administration announced the recall of another five million Takata airbags for cars sold in the United States.

The Japanese company has been forced to recall some 28 million vehicles with defective airbags globally.