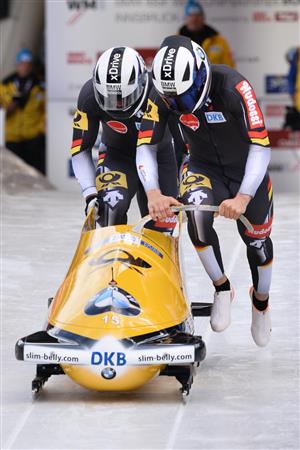 Johannes Lochner and Joshua Bluhm of Germany during the start of the two-man bobsled race at the Bob World Championships in Igls, near Innsbruck, on Saturday, Feb. 13, 2016. (AP Photo)

Igls, Austria: Johannes Lochner and Francesco Friedrich gave Germany a 1-2 lead in the two-man bob competition at the world championships after the opening two heats on Saturday.

Defending overall World Cup champions Oskars Melbardis and Daumants Dreiskens, who opened with a track record but dropped to third after the second run, were 0.17 behind. Beat Heft and Alex Baumann of Switzerland, who won the European title last week, were 0.22 back in fourth.

The final two heats are on Sunday.